Maame Biney is an American speed-skater but originally of a Ghanaian descent.

It is always a thing of joy to see Africans in the diaspora who are doing great for themselves and representing Africa well.

In Utah, United States, an African born American made history as she qualified for the 2018 Speedskating Short Track World Cup competitions. Biney won bronze in the 500 metres at the 2017 World Junior Short Track Speed Skating Championships.

In August the ever laughing and happy Maame Biney gave a good display that singled her out amongst older and more-experienced ice skaters. During the process of qualifying for the winter Olympics, she won three of six finals over a three-day period.

The record breaker loves laughing as mush as she enjoys crying… Who would have thought the two extremes could ever agree.

Here are quick facts you need to know about the ice-skating star.

Before she relocated with her dad at the age of five to the United States, Biney lived in Rockville, Maryland, Ghana.

Leaving home was not an easy adjustment for 5 year old Biney. In time she started adjusting into the new system but still missed her friends.

Biney hopes to be a chemical engineer someday. The Titanic movie is one of her all time favorites.

2. A US Record Breaker

Shani Davis was the first black to do so. At 19, he qualified for the short track team in 2002. After that, he switched to long track where he won four medals, including two golds.

Maame Biney with her recent win has equally become the first Black woman to qualify for a U.S. Olympic speedskating team with a pair of victories in the 500 meters.

“It’s a really good feeling, but it has to set in first because it takes me a while. I’m like, ‘Holy cow.’”

It’s always been Biney and her father. Not much is known about her mother and the family per se.

But as long as her relocation to the US and ice skating training goes, her father played important roles at those vital stages.

It is gathered from one of her interviews that her father personally enrolled her in a training class. Fortunately, it was all in the young lady’s favour as she turned out to be a natural at the game. Till date Kweku, Biney’s father still shows support for her baby girl.

After her win, Biney dedicated her success to her father whom she says was instrumental to her present day victories.

“He’s been through everything and I’m amazed by him. I just want to thank him a lot for everything.” 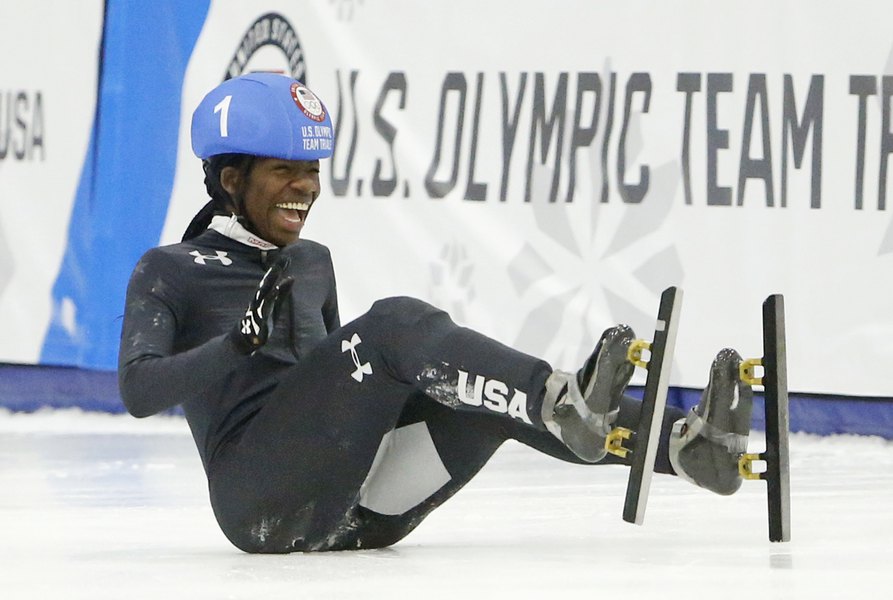 For someone who practically enjoys laughing, it is no surprise that the favorite quote in the world is “Laugh until you can’t laugh anymore.”

Biney is a joyful skater who has rarely been seen without a smile on her face.

“Whenever I get really nervous, I start laughing uncontrollably. That helped me,”

With Maame Biney loses no focus in the training ground even with her chronic and contagious laughter.

She is just a picture of a purpose driven teenager who ultimately has fun doing what she knows how best to do.

Before she qualified in August, she had this to say:

“My goal was to keep a steady speed but to keep my track tight and make sure no one could pass.”

“Before I came here in the month of June, I had a week worth of dreams about going to the Olympics.”