Timothy, the son of George Weah, a former Ballon d’Or winner and current presidential candidate in Liberia has announced himself on a global stage in football.

The New York-born 17-year-old, who has been signed by Paris St-Germain, scored a hat-trick for the United States at the Under-17 World Cup in their 5-0 win over Paraguay.

His second strike in particular, a brilliant curling effort from the edge box into the top corner, was reminiscent of his father who scored a memorable solo goal for Milan against Verona in 1996.

His dad also played for Monaco, Paris-St Germain, Chelsea and Manchester City in a glittering career that saw him named world player of the year in 1995 the first and so far only African player to win the award. 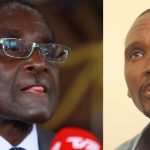