Stepping out from beneath a floppy hat as she pulls a shopping trolley, it is difficult to believe she was once one of Britain’s wealthiest and most charming ladies.

Soraya Khashoggi was spotted walking to a bus stop in west London days after the demise of her ex husband, Saudi Arabian arms merchant Adnan Khashoggi.

In a red coat, loose black skirt, T-shirt and jacket, just her ideal nail trim indicated at the elegance she was once known for.

Off to the shops: Soraya Khashoggi wheels her trolley to wait for a bus in west London

Taking the bus to the shops is a far cry from her heyday as the wife of the tycoon, who died aged 81 on June 6, when she could choose between three planes, three yachts and 17 homes.

Photographer Norman Parkinson described her as ‘the most naturally beautiful woman I have ever photographed’.

Mrs Khashoggi had an affair with late Conservative MP Winston Churchill, namesake and grandson of the former prime minister, and later had a lovechild with former Tory MP Jonathan Aitken.

Born Sandra Daly to a waitress from Leicester, Mrs Khashoggi converted to Islam and changed her name before marrying her husband in 1961.

The couple had five children before splitting in 1974, reportedly leaving Mrs Khashoggi with a ‘record divorce payment’. What has happened to that fortune remains a mystery.

In recent years, the mother of nine, who married twice more and is believed to be in her 70s, has worked in a floristry business with one of her sons. 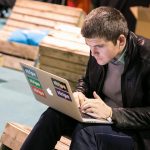