Aurier, 24, has signed a contract until 2022 after he was granted clearance by the Home Office.

On Wednesday, the right-back was told that the French courts had downgraded the criminal conviction he received for assaulting a police officer last year, allowing him to successfully submit a normal work permit application.

“This is a huge and exciting opportunity at a massive football club and I am determined to prove myself as a professional both on and off the pitch,” he told Spurs’ official website.

“This is a fresh start for me and I will do everything to make the Spurs fanbase, which is huge and diverse, proud of me. The fans are the most important people at any club and I am looking forward to showing them and everyone at Spurs the real Serge Aurier.

🗣️ @Serge_aurier: "This is a huge and exciting opportunity at a massive football club and I am determined to prove myself" #WelcomeAurier pic.twitter.com/eo1qZsS2xD

Aurier joined PSG, initially on loan, from Toulouse in 2014 and he has made 54 Ligue 1 appearances in three seasons with the French club, while he has 41 caps for his country. 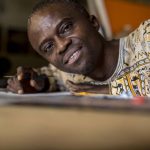