When Ashlee Ammons called her mother, Kerry Schrader, back in November 2014 to complain about a business conference she attended, she didn’t know that they would wind up quitting their high-paying jobs and creating a startup to fix the problem.

Ammons had launched her career as an intern to the NBA star LeBron James’ endorsement company, LRMR, which eventually led to a job in New York and a career in events management. She had been living in New York for a few years and was trying to expand her business network.

“I wanted to go to this conference separate from work to make connections outside of my field. I paid for the ticket myself, my whole purpose was to network,” she said. But when the time came to mingle, the conference had set up this awkward ice-breaking system where people were supposed find other attendees who had the same color dot on their name badges and introduce themselves. 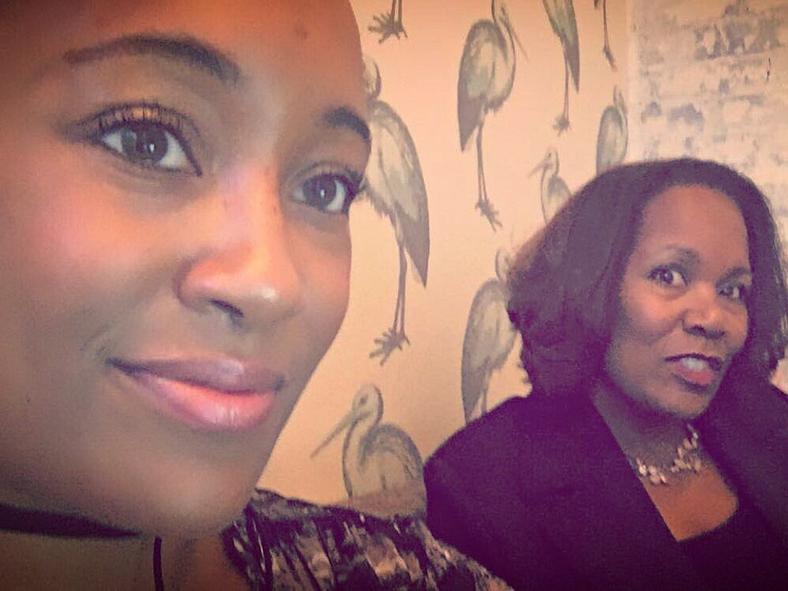 It amounted to going around looking at everyone’s chests to find the dot and then pulling a conversation starter out of thin air.

“It was weird. I didn’t do it,” she told Business Insider. Instead, she went home in frustration and called her mom to vent.

During that talk, Ammons got an earful from Schrader.

Schrader was a high-paid human-resources exec who had worked at giant companies such as Ford, Alcoa, and Noranda. She had just spent the weekend hosting a similar networking party for friends at a trendy Nashville restaurant. “At the end of the night, I was exhausted. I spent the whole night introducing people,” she said.

They started brainstorming an app that would solve the problem. They wanted something that would help them find other people at events with similar interests, give them a time and place to meet, and give them an icebreaker.

Ammons realized an app that could do that could also solve another problem. It would allow event organizers to gather data on and from the actual people who showed up at their events.

And their startup, Mixtroz, was born .

Neither one of them knew anything about computer science and how to create an app.

They also weren’t part of the Silicon Valley set. And, as two black women, they would soon find out the odds were stacked against them.

‘Can’t’ is not an option

Ammons went home to Nashville for Christmas that winter, and they spent their 12 days of Christmas vacation unsuccessfully interviewing developers to hire.

“But we didnt even know what we interviewing for,” Schrader said.

“We got proposals of $10,000 a week to do a wireframe. We had a proposal that was quarter of a million dollars,” said Schrader, with a wireframe referring to a bare-bones demo app. 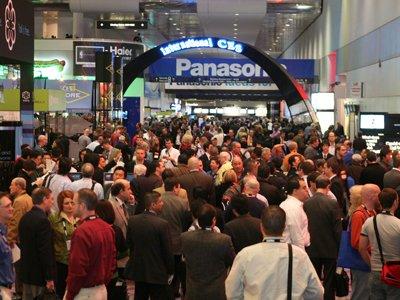 She was roaming around the internet doing research when she saw a conference called AppNation at CES just a few days away. It was sold out and expensive. But she was determined to go.

She called the conference organizers and talked them into giving her a free VIP pass, waiving the $1,500 conference fee. Then she cashed in all her mileage points to get the plane fare and hotel for the pricey last-minute travel to Las Vegas during the enormous CES conference.

Her friends thought she was nuts to spend her vacation at CES. “They laughed at me the next day in church,” she recalled, now with her own laugh.

When Schrader arrived at the show, she felt like she had landed on another planet.

She remembered thinking, “whatever I think Mixtroz is going to be, I wish I had it now. I really felt out of place. Ninety percent of the people there were white males under 22 with hoodies.” 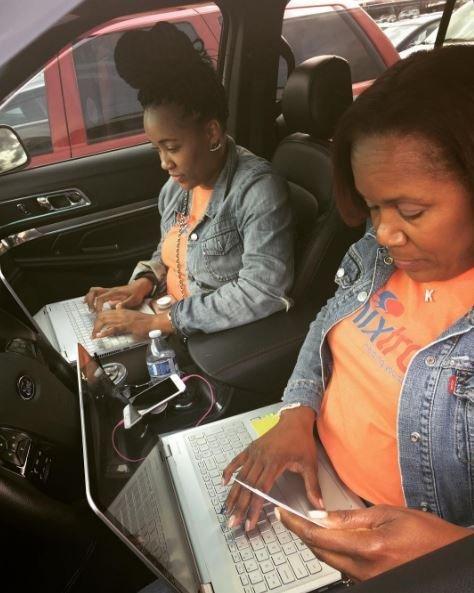 “There were maybe 10-15 women and only two of them were black. I was one and the other one was a server,” she said. “I was so uncomfortable. I didnt have any knowledge of what anyone was talking about.”

She sat down at an empty table that had two unfinished beers, and it was a stroke of luck. “Two white dudes more my age came to my table,” she said. When they sat down, she cracked a joke, saying she knew they chose her table because “I look like Beyonc.”

They laughed and pointed to the beers, which were theirs. The ice was broken. The talking began.

They were app developers and, after making them sign an NDA, she hired them. They flew to Nashville and spent three days working together at her house.

“We worked there, slept there, ate there and we got dirty drunk there,” she said. “Nice people are nice people, no matter what color or package they come in.”

That attitude is the foundation of her whole event-ice-breaking-app company. These developers still work with Mixtroz today, she said.

The urgency to do this startup took on a new strength when Schrader was diagnosed with breast cancer a few months later, in 2015. She’s cancer-free now, but during those early months, she was working on the app and getting treatment. 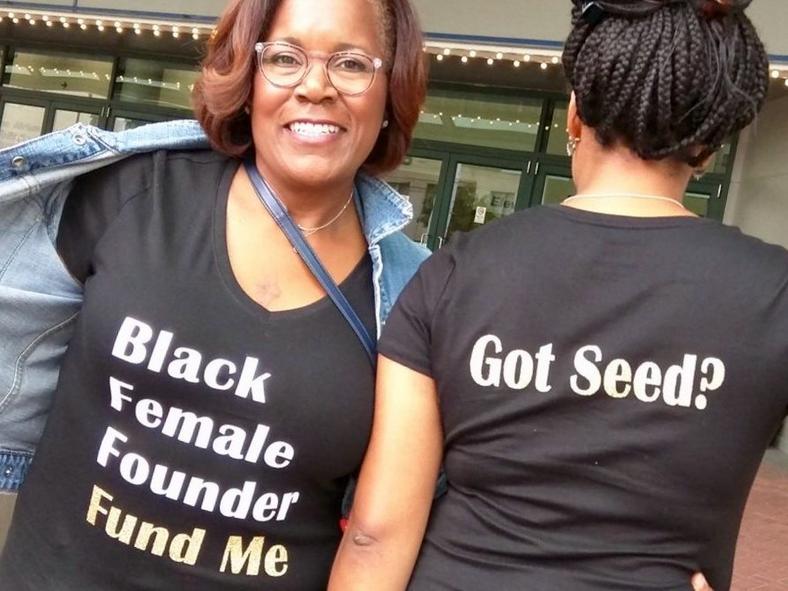 Ammons also admits that when it came to running a tech company, “I knew nothing.”

But they had built the app and used contacts to find beta users willing to pay to try it.

By 2017, they had quit their jobs to do this full time together. It was a big leap of faith. Between them, they had been making about $350,000 per year at their old jobs.

But now, money was tight.

“We had raised a round of friends and family funding, but the money was going fast. We knew the tool worked but things were moving too slow,” Ammons said.

They were nearly out of funding and worried they would have to shut down when they attended the Collision Conference in New Orleans in the hopes of finding investors.

“We had been to other conferences, so we knew we would stick out like sore thumbs,” Ammons said. “My mom always says to make it mean something.”

So she got T-shirts made up that said, “Black female founder: fund me” on the front, and on the back it said, “Got seed?”

The T-shirts got noticed but not entirely in a good way.

“‘How dare you? What kind of statement is this? How can you do this? I should have a white-male-founder-fund-me shirt,'” Ammons remembered them saying. 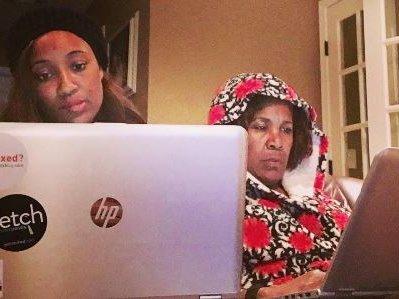 “You dont need the shirt, you’re getting all the money,” she told one young white guy, she recalled. “Meanwhile, people keep coming up to my mom, thinking she’s the queen of corporate drinks. But were not Oprah and Gayle, and were not the wait staff.”

A Forbes reporter got wind of the controversy and wrote about it.

This got them the positive attention they needed.

They began getting invitations to startup- pitch competitions, and doing well at them.

They soon caught the attention of the Velocity startup accelerator in Birmingham, Alabama, which came with $50,000 in funding in convertible notes. So they moved their company to Birmingham and went through the 14-week program.

Case is on a mission with his Revolution “Rise of the Rest” seed venture fund to fund startups outside of Silicon Valley, particularly those with nontraditional founders.

Because the company has had paying customers “since we were in beta,” with growing revenues, Case’s fund led a $1 million seed round for Mixtroz.

That made the Schraders only the 37th and 38th black females to raise $1 million, they said.

And with that influx of cash, Mixtroz is growing and doing well.

“Weve done 150-plus events, and are nearing 10,000 people on the platform,” Ammons said. And while she won’t disclose revenues, she told us that they are exceeding their business plan. The founders are in-demand speakers too at events from coast to coast.

Schrader has since become quite the tech aficionado. “I had to go therapy when my Blackberry broke, and they forced me to go on an iPhone,” she joked. But ask her about her company’s app today, and she’ll rattle on about how they are “updating the platform, moving to a new stack on AWS,” meaning the app uses Amazon’s cloud, Amazon Web Services.

As for how the business has impacted their relationship, Ammons said, “It’s made us closer in a different way. We keep it 100% real because before business comes our family love.”