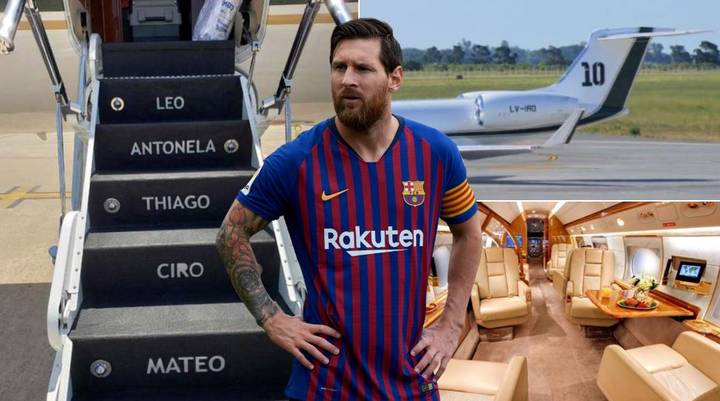 Lionel Messi is making the best out of life for himself and his family as he cruises around the world with his £11million private jet.

For a player that takes home £500,000-per-week after tax in Barcelona, buying a jet of such an amount is a piece of cake.

The aircraft was designed in his homeland in Argentina which has incredible features that will make him seat comfortably with his family in an eight-hour flight.

One of its outstanding features is a specially made kitchen where Messi’s wife Antonella Ruccuzzo can prepare him homemade food.

There two bathrooms to share within the family, one for Messi and his wife while the other will be for his three sons Thiago, Ciro and Matteo.

The can aircraft can accommodate 16 people on board while the chairs can also be folded up and turned into eight beds.

The entrance stairs have the names of Messi wife and three sons and the tail of the plane has his famous No.10 written on it.

Meanwhile, we had earlier reported that Lionel Messi’s private plane developed a problem in mid-air and had to make an emergency landing at the Zavantem airport in Brussels.

According to Belgian news media outlet HLN, the aircraft landed around 9.10am on Friday, April 3, from Tenerife in Spain.

An hour and half later, it is understood took off again before making its way back to Brussels.

Officials at the Brussels airport has refused to comment on the incident due to GDPR legislation.

Meanwhile,we also reported that Mike Tyson has been selling cannabis products since 2016 through his Tyson Holistic label.

The 53-year-old is believed to be earning around £500,000-per-month through his business that offers premium weed strains, edibles and extracts.

The former undisputed king of the heavyweight is building a 418 weed-themed holiday resort that he hopes will be home to a music festival to rival Coachella, as well as the world’s longest lazy river.

Tyson is also planning to build a University that will aim to teach cannabis cultivation tips to intending farmers.