In a remote corner of Sierra Leone, a man caught a glimpse of 16-year-old Marie Kamara as she ran past his house. Soon after, he proposed to her.

“My family does not have money so when he told me he wanted me, I said ‘yes’, said Kamara.

The financial pressure on her family felt more pressing than her wish to continue her education and become a nurse.

Her family needed the money. Her stepfather runs a tailoring shop in Komao, but the coronavirus pandemic meant there were few customers.

Kamara’s suitor was a miner in his mid-20s. His parents could provide rice for Marie’s four younger sisters and access to their watering hole – and they could pay cash.

ALSO READ:  How Verónica José Restored Hope And an Entrepreneurial Spirit to Angola After the Civil War

When her now-husband met with Kamara’s family, she was asked if she agreed with the proposal.

Thinking of the dire economic situation of her family, she accepted.

Kamara hopes her younger sisters won’t have to go through the same experience. She advises them to make sure they stay in school.

Marriages of underage girls like Kamara are on the rise as the coronavirus pandemic deepens poverty around the world, threatening to undo years of work by activists trying to stop the tradition in countries such as Sierra Leone.

The United Nations estimates that hardships resulting from COVID-19 will drive 13 million more girls to marry before the age of 18.

Statistics, though, are hard to come by as most families carry out such weddings in secret.

In most cases, needy parents receive a dowry for their daughter, a bit of land or livestock that can provide income, or cash and a promise to take over financial responsibility for the young bride.

The girl, in return, takes on the household chores of her husband’s family and often farm work too.

It wasn’t clear when or even if school ever would resume, and many parents feared their idle daughters would get pregnant out of wedlock, said Isata Dumbaya, from Partners in Health Sierra Leone, whose clinics provide health services to teenagers.

Many of the girls’ mothers were themselves married off as teenagers, she explained, and see early marriage as normal.

“They do not see it as harming their children,” Dumbaya said, but rather an investment in securing their daughters a future.

It’s a mindset that Sierra Leone’s first lady, Fatima Maada Bio, has been working to change with her “Hands Off Our Girls” campaign.

Bio herself managed to escape to the United Kingdom as a teenager after learning her father intended to marry her off to someone.

She now has made it her life’s work to help other underage girls. “If you force a child to be married at a very early age, you are legalizing the rape of that child,” she told the Associated Press.

‘Hands off our girls’

While sex with underage girls is illegal in Sierra Leone, it is rarely enforced.

Police say cases aren’t reported because the families already have agreed to the marriage, whether the brides have or not.

Billboards with the first lady’s image reading “Hands off our girls” still line the roadsides, but COVID-19 precautions mean the campaign has had to scale back many of its outreach efforts.

Like Bio, to become the first lady of Sierra Leone was the dream of Mariama Conteh, whose estimated age is 17. She’s expecting a baby within the next two months.

Conteh had left her remote village near the border with Guinea to live with an aunt in Koidu and attend school.

Then in April a 28-year-old man in their compound expressed interest in her.

“I told my aunt that I did not want to get married,” said Conteh, but her aunt replied that if she did not get married, she’d have to return to her home village.

Conteh figured out that if she refused the proposal, her own parents would try to marry her off once she got home anyway. 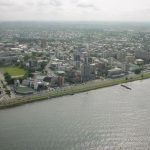 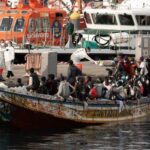