Cardiovascular diseases are a major cause of mortality, morbidity and disability of the elderly in both developed and developing countries. Many died as a result of ignorance on how to live healthy during old age. Approximately one in four adults aged 65 years or older has diabetes  and Patients with diabetes are at very high risk for developing cardiovascular disease (CVD) and associated morbidity and mortality, and this risk increases dramatically with age because the different systems that serve human body and mind undergo alterations during the aging process as an unavoidable part of life.

In view of this, a Professor of Adult Education at the University of Lagos, Akoka, Prof Oluwayemisi Obashoro-John decided to found a Foundation after her name, Oluwayemisi Obashoro Foundation (OLOF) which she uses as a platform to celebrate her birthday with the elderly by giving lectures on how rto live healthy in old age.

This year’s lecture dwelt on cardiovascular disease in old age and how to avoid it.

One of the participants,  Mrs Christianah Fagbemi, National Secretary of Senior Citizens of Nigeria, said the event brings together the aged people to interact and learn how to live healthy in old age, saying all her lectures have been educative and helped to improve the health conditions of the elderly ones and for all the elderly groups under the Foundation have been increasing yearly.

“The Senior Citizens of Nigeria Association is like an umbrella Association for all the elderly people from different areas, today we discussed about Cardiovascular diseases and how to have good health in old age , we were told to watch what we eat in our old age, my advice to old people out there is that once they are 60 years old you should watch what you eat, and that they should join one of the elderly groups if not they should contact Prof Obashoro so that they can get fixed up in one of the groups, it promotes good interactive fora for us, and we learn from one another also on how to live healthy in old age, because the objective of the elderly groups is that we don’t want our elderly to go into their graves in a very sad way or have a very bad health”.

Emmanuel Shobowale, a member of the Makoko Welfare for the Elderly group said the event is very encouraging as it teaches on how to age gracefully, know what they can eat and live comfortably as he advised other old people to join one of the elderly groups association so that they can enjoy such benefits that this type of lecture gives.

He lamented that the country does not take proper care ofr the old people.

“I have an opportunity to stay in the United States for some time and I witnessed how old people are being catered for, it’s very sad in this country they don’t take care of the elderly and it is time we wake up to our responsibility in the area of care for the aged, people that have worked throughout their lives in their old age they deserve to be taken care of and I hope through an Association like this and through Prof Obashoro the old people will learn how to take care of themselves. My appeal to the government is to look into this issue of proper care for the elderly so that they don’t die unnecessarily and they can age gracefully and they don’t die too early”.

“I’m very sure the President knows a lot about the condition of the elderly in this country because he is old too, and he knows what the elderly are going through, although government is taking care of him but he should think of who will take care of the people at the lower level government has a big role to play especially when the pension system is collapsing, pensioners don’t get their pensions regularly, how do they take care of themselves, I expect the government at this stage to take steps towards ensuring that pensioners are properly rewarded especially when we even have an elderly President and members of the National Assembly should also think in that direction and they should also remember that they too will become old some day and face what the elderly people are facing now, if they don’t do the proper thing by having a better plan they will also face what we are facing now”, he said.

In his own submission, Otunba Tunde Olatunji, said the old people have a lot to still contribute to the development of their nation because the word of an elderly are words of wisdom saying without elders there can be no progress because as they have got a lot of experience which they can pass on to the people coming behind, but bemoaned the situation where elders are being neglected in the country and are left to suffer, citing case where some of them are being neglected by their children while some don’t even have children to cater for them at all.

“They have worked so hard for their country and to get their pensions becomes problematic and frustrating and some have died in the process, our government  don’t care about the elderly health wise and otherwise and even in terms of feeding, some of them don’t have food to eat. My take home from today’s lecture is that I’ve learnt to reduce my alcohol intake because I used to take a lot of alcohol before,” he said.

The convener , Prof Oluwayemisi Obashoro said old age makes one to become more careful, generally it makes one becomes slow in so many things due to changes in the physique, the brain and every organ in the body automatically slows down but it does not affect one’s ability to think properly and take proper decision.

She said one major role the old can play in the society is that of consultancy, saying in an environment where there are no older persons the younger ones cannot take the lead due to inexperience. 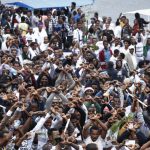