We Africans cherish our maize. It is a standout amongst the most widely recognized nourishment staples that is eaten likewise over the diverse nations of the landmass.

Maize, which is likewise alluded to as corn, is an oat grain that is across the board in Africa as well as the world. It is loaded with fiber and very nutritious. Maize can be eaten on the cob, as oat, steamed, as a pudding/porridge et cetera.

To know more about how this staple food is eaten across Africa, keep reading. (side note: there is a surprise recipe* at the end that originates from some place exotic!)

Sadza is a common staple food in Zimbabwe. It is made of corn meal (mealie-meal) which is finely ground and steamed in a pot to create a thick consistency that can be eaten with vegetables or soups such as Muriwo Unedovi or Muboora.

Banku or Kenkey are popular foods in Ghana which are similar to Sadza. They are fufu-like but are made with maize and sometimes with the addition of plantain or cassava. Kenkey is usually cooked in part, before being steamed in plantain leaves or banana husks for an added local flavor. They are also slightly grainy in texture and can be eaten with a pepper sauce (shito) and tilapia, or any soup of choice. Ugali is a cornmeal popular in Eastern Africa. Although Ugali is primarily made from maize, it can be substituted with sorghum or millet flour and sometimes mixed with cassava flour. It can also be eaten with greens on the side or stews. This is a street-side food that is predominantly eaten in Western Africa. The yellow corn is usually grilled by the roadside or steamed and often accompanied with grilled/ boiled Ube (Nsafu, butter fruit, African bush pear) or coconut. Ogi/Akamu (Nigeria) is a meal made from fermented maize. It’s usually eaten as a breakfast meal, served with moi-moi (steamed bean pudding) or akara (deep fried bean puree). Newer variations include fruits to the mixture to give it a fruity flavor. Phutu pap, also known as Krummelpap is another spin on cornmeal. Unlike sadza, kenkey or ogi, it has a grainy, fluffy and crumbly texture which can be scooped with a spoon, like rice. It is commonly eaten in South Africa and accompanied with stews such as chakalaka or sour milk. South Africans love their Boerwors, which are a kind of sausages in the region cooked in a coil and can be eaten with virtually anything including mielie pap. The woers are added to a gravy which serves as a delicious accompaniment for the mielie pap. Pap en woers can also be served baked. The pap, boerewors, cheese, sauce and spices are combined in a dish and baked in a one-pot goodness. This a steamed corn pudding which is famous in the Niger Delta region of Nigeria. It is usually wrapped in leaves to give it a sturdy yet soft texture and earthy flavor. In some other parts of Nigeria, it is eaten as a porridge, complete with its own spices, and vegetables added to the pot. It can also be accompanied with yam, a tuber crop or garri (fried cassava grains). Samp is what you get when kernels of corn have been dehulled or have had their husks removed. It can be cooked with peanut butter, beans, or served steamed with gravies like chakalaka. Popcorn, the favorite snack which is now associated with movies is widely eaten in Africa. Although not originated in Africa, it is quite common here. The popcorn kernels expand when heated in the oven hence the “pop” in popcorn. It can be eaten as a roadside snack, sometimes with peanuts as is common on some streets in Nigeria. This is another not-originated-in-Africa-but-widely-eaten-here maize food. The first corn flakes were made by Dr. John Harvey Kellogg in 1894 in the United States by toasting flakes of corn. Now a lot of cereals which are made from corn can be found in markets. It’s high fiber content and easy preparation makes it a common favorite for breakfast.

Maize from the Caribbean with love… Cou-cou is the national dish of Barbados. Due to how similar Carribean and African dishes are, cou-cou is worth a try if you are looking for a twist. Cou-cou is made with a cou-cou or fungi stick and cornmeal. After made to a thick fufu-like consistency, the Okra soup with the addition of “flying fish” is added to the cooked corn meal. 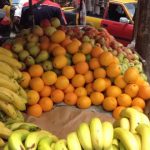 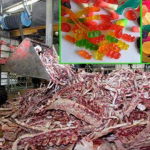