The 66-year-old oil magnate is one of the richest black women in the world and the owner of Famfa Oil Limited, a Nigerian oil exploration company.

Folorunso Alakija, Nigeria’s richest woman is a dynamic businesswoman and philanthropist and one of the oil magnates in Africa’s largest economy.

Alakija’s investment – Where her money comes from

Alakija’s first company was a fashion label whose customers included the wife of former Nigerian president Ibrahim Babangida. She is the group managing director of The Rose of Sharon Group which consists of The Rose of Sharon Prints & Promotions Limited and Digital Reality Prints Limited.

Her husband, Modupe Alakija is the chairman while she is the executive vice-chairman of Famfa Oil Limited while her children are executive directors of the company.

According to Forbes, her net worth is estimated at $1.65 billion as at January 2018.

She has a foundation called the Rose of Sharon Foundation that helps widows and orphans by empowering them through scholarships and business grants.

Agbami scholarship beneficiaries during their graduation at University of Ibadan

Her company is also a major sponsor of the popular scholarship and reliable scheme in the Nigerian universities with over a thousand people yearly as beneficiaries, the Agbami medical and engineering scholarship scheme. 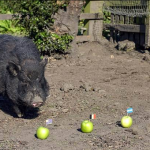