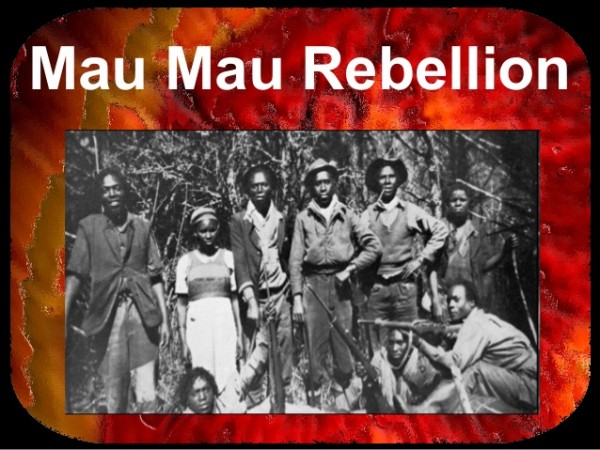 The Mau Mau Rebellion was a militant African nationalist movement active in Kenya during the 1950s. Its main aim was to remove British rule and European settlers from the country.

BACKGROUND OF THE MAU MAU REBELLION

The uprising grew out of anger over British colonial policies, but much of the fighting was between Kikuyu people, an ethnic group that makes up about 20 percent of Kenya’s population.

The four main causes of the revolt were low wages, access to land, female circumcision (also known as female genital mutilation, FGM), and kipande  – identity cards African workers were required to submit to their white employers, who sometimes refused to return them or even destroyed the cards making it incredibly difficult for workers to apply for other employment.

Kikuyu were pressured to take the Mau Mau oath by militant nationalists, which were opposed by conservative elements of their society. While the British believed Jomo Kenyatta to be the overall leader, he was a moderate nationalist and threatened by the more militant nationalists who would continue the rebellion after his arrest.

MILESTONES AND TIMELINE OF THE MAU MAU UPRISING

August 1951: Mau Mau Secret Society Rumored
Information is filtering back about secret meetings being held in the forests outside Nairobi. A secret society called the Mau Mau was believed to have been started in the previous year.

It requires its members to take an oath to drive the white man from Kenya. Intelligence suggests that membership of the Mau Mau is currently restricted to members of the Kikuyu tribe, many of whom have been arrested during burglaries in Nairobi’s white suburbs.

August 24, 1952: Curfew Imposed
The Kenyan government imposes a curfew in three districts on the outskirts of Nairobi where gangs of arsonists, believed to be members of the Mau Mau, have been setting fire to homes of Africans who refuse to take the Mau Mau oath.

October 7, 1952: Assassination
Senior Chief Waruhui is assassinated in Kenya — he is speared to death in broad daylight on a main road on the outskirts of Nairobi. He had recently spoken out against increasing Mau Mau aggression against colonial rule.

October 21, 1952: State of Emergency Declared
With the imminent arrival of British troops, the Kenyan government declares a state of emergency following a month of increasing hostility. Over 40 people have been murdered in Nairobi in the last four weeks and the Mau Mau, officially declared terrorists, have acquired firearms to use along with the more traditional pangas. As part of the overall clamp down Jomo Kenyatta, president of the Kenya African Union, is arrested for alleged Mau Mau involvement.

October 30, 1952: Arrests of Mau Mau Activists
British troops are involved in the arrest of over 500 suspected Mau Mau activists.

November 14, 1952: Schools Closed
Thirty-four schools in Kikuyu tribal areas are closed as a measure to restrict the actions of Mau Mau activists.

He is flown to a remote district station, Kapenguria, which reportedly has no telephone or rail communications with the rest of Kenya, and is being held there incommunicado.

November 25, 1952: Open Rebellion
Open rebellion against British rule in Kenya is declared by the Mau Mau. In response, British forces arrest over 2000 Kikuyu who they suspect of being Mau Mau members.

January 18, 1953: Death Penalty for Administering Mau Mau Oath
Governor-general Sir Evelyn Baring imposes the death penalty for anyone who administers the Mau Mau oath. The oath is often forced upon Kikuyu tribesmen at the point of a knife and calls for the individual’s death if he fails to kill a European farmer when ordered.

January 26, 1953: White Settlers Panic and Take Action
Panic has spread through Europeans in Kenya after the slaying of a white settler farmer and his family.

Settler groups, displeased with the government’s response to the increasing Mau Mau threat have created their own Commando Units to deal with the threat. Sir Evelyn Baring, the Governor-general of Kenya has announced that a new offensive is to begin under the command of Major-general William Hinde. Amongst those speaking out against the Mau Mau threat and the government’s inaction is Elspeth Huxley, author (who wrote The Flame Trees of Thika in 1959), who in a recent newspaper article compares Jomo Kenyatta to Hitler.

April 17, 1953: 1000 Arrested
An additional 1000 Mau Mau suspects have been arrested over the past week around the capital Nairobi.

May 3, 1953: Murders
Nineteen Kikuyu members of the Home Guard are murdered by the Mau Mau.

May 29, 1953: Kikuyu Cordoned Off
Kikuyu tribal lands are to be cordoned off from the rest of Kenya to prevent Mau Mau activists from circulating to other areas.

March 1954: British Plan
The great British plan to end the Mau Mau Rebellion in Kenya is presented to the country’s legislature — General China, captured in January, is to write to the other terrorist leaders suggesting that nothing further can be gained from the conflict and that they should surrender themselves to British troops waiting in the Aberdare foothills.

April 11, 1954: Failure of the Plan
British authorities in Kenya admit that the ‘General China operation’ revealed previously to the Kenyan legislature has failed.

May 26, 1954: Treetops Hotel Burned
The Treetops Hotel, where Princess Elizabeth and her husband were staying when they heard of King George VI’s death and her succession to the throne of England, is burnt down by Mau Mau activists.

January 18, 1955: Amnesty Offered
Governor-general Baring offers an amnesty to Mau Mau activists if they would surrender. They would still face imprisonment but wouldn’t suffer the death penalty for their crimes. European settlers are up in arms at the leniency of the offer.

June 10, 1955: Amnesty Withdrawn
Britain withdraws the offer of amnesty to the Mau Mau.

June 24, 1955: Death Sentences
With the amnesty withdrawn, British authorities in Kenya can proceed with the death sentence for nine Mau Mau activists implicated in the death of two English schoolboys.

October 1955: Death Toll
Official reports say that more than 70,000 Kikuyu tribesmen suspected of Mau Mau membership were imprisoned, while over 13,000 people were killed by British troops and Mau Mau activists over the last three years of the Mau Mau Rebellion.

July 1959: British Opposition Attacks
The deaths of 11 Mau Mau activists held at Hola Camp in Kenya is cited as part of the British opposition attacks on the UK government over its role in Africa.

November 10, 1959: State of Emergency Ends
The state of emergency is ended in Kenya.

April 18, 1961: Kenyatta Released
In return for the release of Jomo Kenyatta, African nationalist leaders agree to take a role in Kenya’s government.

LEGACY AND AFTERMATH OF THE MAU MAU REBELLION

Kenya became independent on December 12, 1963, seven years after the collapse of the uprising. Many argue that the Mau Mau uprising helped catalyze decolonization as it showed that colonial control could only be maintained through the use of extreme force. The moral and financial cost of colonization was a growing issue with British voters, and the Mau Mau revolt brought those issues to a head.

The fighting between Kikuyu communities, however, made their legacy contentious within Kenya. The colonial legislation outlawing the Mau Mau defined them as terrorists, a designation that remained in place until 2003 when the Kenyan government revoked the law. The government has since established monuments celebrating Mau Mau rebels as national heroes.

In 2013 the British government formally apologized for the brutal tactics it used to suppress the uprising and agreed to pay approximately £20 million pounds in compensation to surviving victims of abuse. 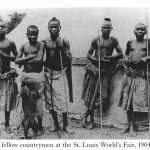 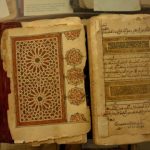