Donald Trump praises ‘unwavering commitment to faith, family, and country’ while Barack Obama notes ‘legacy of service that may never be matched’

Donald Trump, Barack Obama and George W Bush have led tributes to George HW Bush, the 41st US president who died on Friday at the age 94. 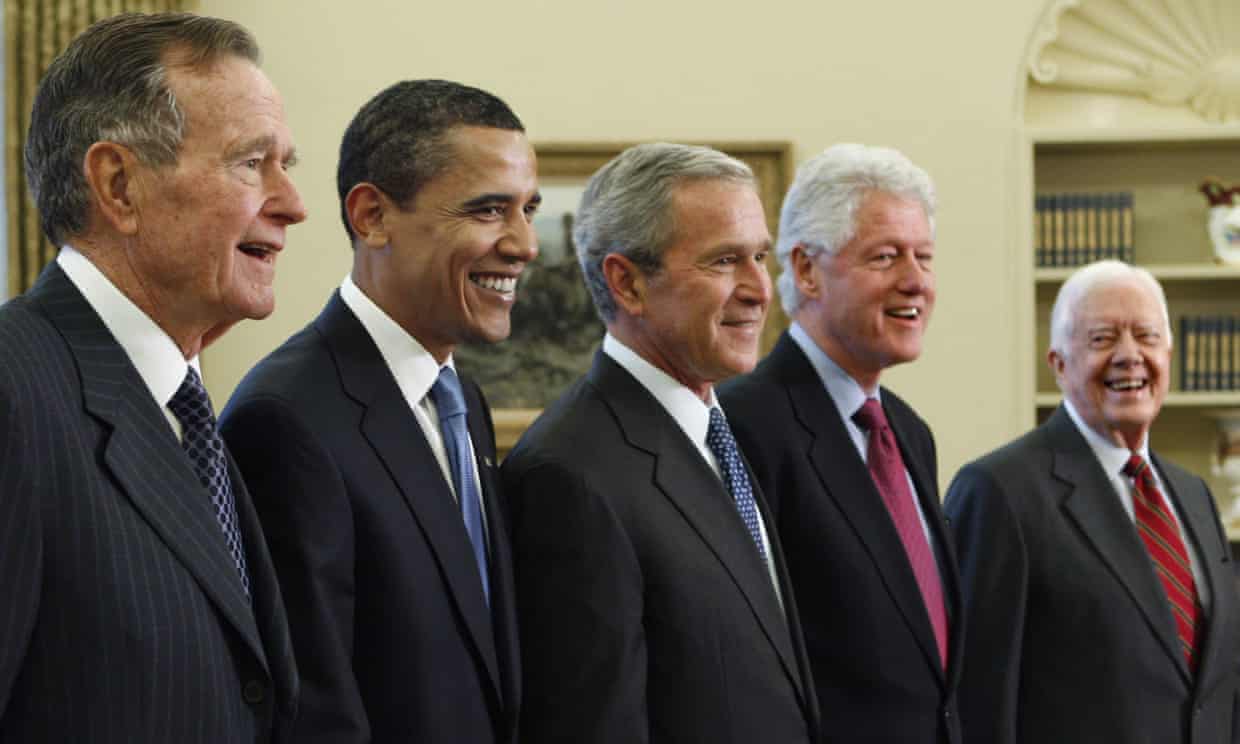 Trump issued a statement less than an hour after Bush’s death being announced and the White House lowered its flag to half mast. “Melania and I join with a grieving nation to mourn the loss of former President George HW Bush, who passed away last night.

“Through his essential authenticity, disarming wit, and unwavering commitment to faith, family, and country, President Bush inspired generations of his fellow Americans to public service — to be, in his words, ‘a thousand points of light’ illuminating the greatness, hope, and opportunity of America to the world.”

The current president noted Bush’s service in the second world war, at the CIA and in political office. He served as vice-president for eight years during Ronald Reagan’s two terms as president, before being elected to the White House himself, culminating in “a peaceful and victorious conclusion of the cold war”.

The statement added: “Along with his full life of service to country, we will remember President Bush for his devotion to family – especially the love of his life, Barbara. His example lives on, and will continue to stir future Americans to pursue a greater cause. Our hearts ache with his loss, and we, with the American people, send our prayers to the entire Bush family, as we honor the life and legacy of 41.”

Trump has previously clashed bitterly with the Bush family, but the speed and warmth of the statement contrasted with his slow response to the death of Republican Senator John McCain earlier this year. The president did not attend McCain’s funeral, where Obama and George W Bush both delivered tributes.

Obama visited George HW Bush at his residence in Houston earlier this week in what was described as a rekindling of what was already a warm friendship. On Friday Obama, the 44th president, said in a statement that America had “lost a patriot and humble servant”. He continued: “It’s a legacy of service that may never be matched, even though he’d want all of us to try.

Bill Clinton, who defeated Bush in the 1992 presidential election, said he and Hillary gave thanks for Bush’s “great long life of service, love and friendship”. “ I will be forever grateful for the friendship we formed. From the moment I met him as a young governor invited to his home in Kennebunkport, I was struck by the kindness he showed to Chelsea, by his innate and genuine decency, and by his devotion to Barbara, his children and their growing brood.

“He never stopped serving. I saw it up close, working with him on tsunami relief in Asia and here at home after Hurricane Katrina,” said Clinton, adding that he would “always hold our friendship as one of my life’s greatest gifts”.

Announcing the death of his “dear Dad” in a statement on Friday, Bush said: “George HW Bush was a man of the highest character and the best dad a son or daughter could ask for. The entire Bush family is deeply grateful for 41’s life and love, for the compassion of those who have cared and prayed for Dad, and for the condolences of our friends and fellow citizens.”

Other family members added their voices. George P Bush, Texas land commissioner and grandson of the former president, tweeted: “My grandfather was the greatest man I ever knew. His life spanned the American Century – he fought in World War II … took part in the Texas oil boom … served out a distinguished career in public service including serving as president during the final days of the cold war.”

Bush’s death came seven months after that of his wife, former first lady Barbara Bush, to whom he was married for 73 years – longer than any other president and first lady. At Barbara Bush’s funeral, a eulogy was delivered by Jon Meacham, author of a biography of George HW Bush.

On Friday night, following news of Bush’s death, Meacham tweeted a quotation from a prayer: “Eternal rest grant unto him, O Lord, and may light perpetual shine upon him.”

Washington’s often ugly polarisation does not apply at moments such as this. There were tributes from both sides of the political aisle to Bush, who was president from 1989 to 1993 and lived longer than any of his predecessors. His vice-president, Dan Quayle, said: “I have often told my children ‘If you want a role model in your life – look to President George Herbert Walker Bush. The world mourns the loss of a great American. But, it also celebrates a life well lived.”

Republican Senator Jeff Flake tweeted: “So sorry to hear of the death of George HW Bush tonight. We all owe a debt of gratitude for his honorable and humble service to the nation, and for his enduring example of kindness. Heartfelt condolences to the entire Bush family.”

Democratic Senator Mark Warner said: “​George H.W. Bush was a class act – a person of tremendous strength and moral character who exemplified the values of public service. There can be no question that his highest commitment was always to our country and to our values – to justice, freedom, and the rights of human beings everywhere. My thoughts are with the Bush family at this time of loss.”

Most tributes were careful to avoid the temptation of drawing a contrast between Bush and Trump. But Steve Schmidt, a Republican strategist and Trump critic, told the MSNBC network: “Tonight we mark the passing of an American giant. I think that he will go down in history as this country’s greatest one-term president and will be remembered as a consequential and great president: the man who was the architect of the end of the cold war, who showed qualities of restraint that we see missing from leadership in American life today.”