Ronaldo demonstrated horrible disrespect to Zinedine Zidane  in their 2 – 2 draw away to Las Palmas. The three-time Balon d’Or winner was substituted in the 72nd minute. The Portuguese star was seen muttering various words under his breath as he made his way towards the dugout. Ronaldo couldn’t even look at Zidane and his sulk lasted for several more minutes as he watched the closing stages of the match from the sidelines.

But what was the Real Madrid star saying? According to  Sport, the 31-year-old said the Spanish equivalent of “your f**king mother” or “f**k you” in the direction of the Zidane. “Not just that, but he also said…a Portuguese expression somewhere between ‘f–k yourself’ and ‘for f–k’s sake,’” the source added. 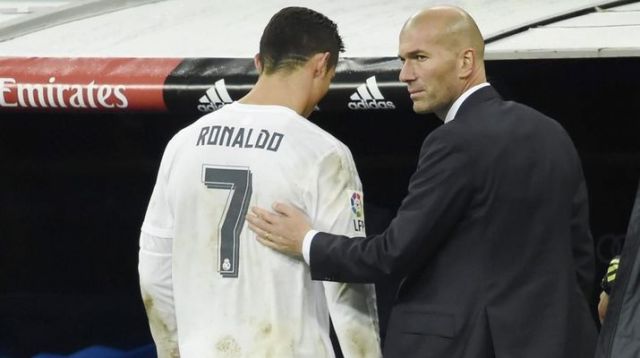 And Zidane reacted: “It was not that [Ronaldo] was playing badly.  Cristiano must rest too sometimes. It was just for that. He was playing well. Tonight I took him off thinking of Tuesday’s game.”

When asked about Ronaldo’s reaction, Zidane noted:  “Angry? That would be your interpretation.”

However the manager stressed: “He always wants to be on the pitch. We have to take him out sometimes, and we did today. It does not change anything.”