In most African communities, riddles are a typical form of art. They are basic and exquisite approaches to convey a great deal of significance in few words. Riddles assume an essential part in the conventions of African discourse and conversation.  Like proverbs, African riddles are brief and in light of perceptions of nature. However,, with riddles, the audience is relied upon to figure the response to an inquiry or the meaning of a statement.

Riddles are used manly for entertainment and stimulating thinking and some are not presented as question, albeit implicitly, but as true statements of something the listener has to catch, interpret and locate in its proper context.

Let me go far away and when I come back let me catch hold of the tail of my mother’s cow. A drinking water ladle.

A child’s porridge is delicious. Sleep.

I was going along the road when I heard a person calling me, Sister -in-law!’but when l turned round there was no one in sight.  Dry pigeon peas on a pod.

My house is small but it has many windows. A fish trap.

I have shut the door on my children and they are now fighting. Roasting maize seeds on the cob.

My house is large but its door is small. A bottle.

My children are four in number but, when one goes away, the rest cannot work. The legs of a bed.

Who has a house too small for guests? A turtle.

What do you look at with one eye, but never with two?  The inside of a bottle.

What is the village the Supreme Being built with only one house for the day and many for the night? The firmament.

What is the house my father built with no central pole? The sky.

What is the fire God lit and never put out? The sun.

What is the fire my father lit that burns in the night, but not in the day? The moon.

What is it that cannot be counted? The stars.

What is it that when it falls does not make noise? The night

There is a river in which you can wash only in the morning.  – The dew

Everything is visible. But there is something that cannot be seen. – God

Why is a man like pepper? Until you have tested him, you can’t tell how strong he is.

What things always chase each other but never overtake one another? The wheels of a vehicle.

Who can whistle from another man’s mouth? The other man.

Who has a house too small for guest? A tortoise

What do you look at with one eye but never with two?  The inside of a bottle

It falls standing but runs on its belly. What is it? Rain.

It is greater than God and more evil than the devil. The poor have it, the rich need it and if you eat it you’ll die.What is it? Nothing.

What it is that cannot be caught or brought? – The smoke

Wherever I go, it closely follows me. – My shadow.

It keeps on setting off, but it never arrives. – The sun.

My father’s suit is made of holes. – Fishing net.

My son is crying in the forest. I hear him, but I do not see him. – The wind.

When I face an enemy, I do know what to do. But facing this one, there is nothing I can do. – Incurable disease.

The two of us cross the wilderness without talking to each other. You and your shadow.

Your mother walks across the village with life poking out (of her body). The leg of a baby (you’ll often see a baby’s leg protruding from the cloth sling or swaddle with which mothers tie their young children to their back)

My brown one with speedy calves? My bow and arrows.

They moved homes and the red one was born? The fire (the Maasai often burn up the old village when they move)

I have an ox who lives in the midst of enemies? The tongue.

Why is your sister so very short yet there is no fruit that is beyond her reach? Because she is a bird.

My house/dwelling has neither windows nor doors. An egg.

My mountain has a forest only at the peak/summit.  My head.

My lamps illuminates the entire world/earth. The sun and moon.

I hear him all the time but I don’t see him. Wind.

It is invisible and untouchable. Air

It makes all the people cry. Smoke.

It is always with you but you never see it. The back of your head.

My hen has laid an egg on thorns. A pineapple.

My European’s hand is always on his waist. A tea cup.

When I beat/hit my child, the people dance/play. My drum.

My house/dwelling has no lights (inside). A grave.

It is yours, but your friends use it more than you do, What it is?Your name.

What is it that gets wetter when it dries? A towel.

What is as light as a feather, yet no man can hold it for long? One’s breath.

On my way home the other day, I met with a load of wood that was neither straight nor crooked. What kind of wood was it? Sawdust.

I am the beginning of sorrow, and the end of sickness. You cannot express happiness without me, yet I am in the midst of crosses. I am always in risk, yet never in danger. You may find me in the sun, but I am never out of darkness. What am I? The letter ‘S’.

Discovered in Africa, I spread like a tide, to become a hot staple known the world wide. A necessity to some, a treasure to many, I’m best enjoyed among pleasant company. Some like me hot and some like me cold. Some prefer mild, others only bold. Some take me straight, while some like to savor my essence to which has been added a flavor. So put down your cares and sit awhile with me; I’ll send you back refreshed and full of energy. What am I? Coffee.

My personal favourite for a laugh – The Denka of Southern Sudan and many other pastoralist tribes like to tease the listeners with the following:

Crossing a river with your cow and your wife, in the risk of drowning, what will you save? – The cow. With it you can marry another woman.

When I look at you I see you through to the intestines. A granary.

I have gone round the forest with a multicoloured motorcycle. A rainbow.

It is upside down but does not leak. A cow’s udder.

They face up as if they are about to lead a song. The horns of cattle.

I have a person who stays between two swords but never gets cut. The tongue.

My house has only one pole. The mushroom.

Those things in the cave have one hundred eyes. Honey combs.

An elephant with one ear. A cup.

And finally a few more philosophic riddles that could have multiple meanings and answers and retell a page of history.

What is death without mourning? Is it not sleep akin to death? While sleeping, one is as if were dead; yet no mourning is done.

What is the use of shouting if nobody comes to help?  The cock crows (cries), but nobody rushes to its help. 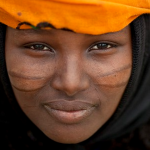 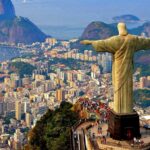