Aliko Dangote is the richest black person in the world, with a staggering $14.1 billion to his name. He is also the richest person in Africa. Fellow countryman Mike Adenuga follows him with a fortune of $5.3 billion.

Other people who make up the list are Michael Jordan, Strive Masiyiwa, Oprah Winfrey, Isabel dos Santos and Mo Ibrahim.

Below is a list of the 11 black billionaires in the world:

The cement tycoon is the richest person in Africa and the richest black person in the world with an estimated worth of $14.1 billion. He is also into the sugar and flour businesses. Dangote Cement is the largest cement manufacturer in Africa. He has also founded the Dangote Foundation, with focus on health, education and agriculture.

With major investments in oil, Mike Adenuga has an estimated worth of $5.3 billion, and he also has interests in telecoms, real estate and banking. Globacom, which he owns, is the second largest operator after MTN in Nigeria with more than 30 million subscribers as of now. He is usually known in Nigerian business and social circles as the “Guru.” He obtained an MBA from Pace University and interestingly, he used to drive a taxi. He runs Conoil Producing which is one of the largest indigenous oil exploration and producing companies in Nigeria today. He also has lots and lots of properties in Ghana and Nigeria.

Robert Smith, sits at an estimated worth of $4.4 billion. He is a former Goldman Sachs executive, and he started n Austin, Texas-based private equity and venture capital firm Vista Equity Partners in 2000. It has made a lot of admirable progress such that it now has over $30 billion in assets under management, and is one of the world’s most successful hedge funds.

ALSO READ:  These Are The Richest Self-Made Black Women In America Right Now

Can you imagine what TV would have been like without the stellar talk show prowess of Oprah Winfrey? She has a worth of $2.7 billion, and “The Oprah Winfrey Show” was her gateway to loads and loads of success as a media mogul and also a big media personality. She now has her own cable channel, OWN (Oprah Winfrey Network). It was once a struggling entity but now it is  cash flow positive and is enjoying soaring ratings on the back of a series of successful sitcom and drama collaborations.

The daughter of the former Angolan president Jose Eduardo dos Santos. She is the richest woman in Africa with a worth of $2.6 billion. She was once at the helm of Sonangol, the Angolan state-owned company but the new government of Joao Lourenco removed her from the post and is now questioning her tenure, with allegations of financial impropriety, allegations which she denies. At 45, she is the youngest black billionaire in the world.

Patrice Motsepe has massive investments in mining. He is the CEO of African Rainbow Minerals, a listed mining company that owns ferrous and base metals, platinum and coal operations in South Africa. His worth is estimated around $2.5 billion. He also owns the South African football club Mamelodi Sundowns.

At $1.7 billion, she is the vice chair of Nigerian oil company Famfa Oil. She is Nigeria’s richest woman. Famfa Oil owns a stake in Agbami oil field, a prolific offshore asset. She was once a secretary at a merchant bank in Nigeria, went into fashion designing in England and founded a Nigerian fashion label that catered to upscale clientele, including Maryam Babangida, wife to Nigeria’s former military president Ibrahim Babangida.

Literally, the face of Basketball. And, with all those Jordan sneakers, his estimated worth is $1.65 billion. He is the  majority shareholder of Charlotte Bobcats and enjoys lucrative deals with the likes of Gatorade, Hanes and Upper Deck. The brand Jordan is his biggest flow of gigantic revenues, and a $1 billion (sales) sportswear partnership with Nike.

At $1.19 billion, Lee-Chin owns a 65% stake in National Commercial Bank Jamaica. He is a Canadian of Jamaican origin.

Mo Ibrahim has a value of around $1.18 billion. His initial fortune came as the founder of Celtel, an African mobile phone company, which he sold to MTC of Kuwait for $3.4 billion in 2005. He made himself $1.4 billion. His major focus now is improving the lives of Africans through the Mo Ibrahim Foundation. 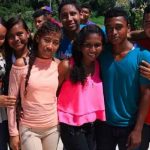 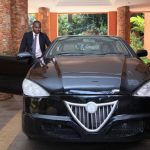