Tech giants, Google and Microsoft have agreed to clamp down on piracy in the UK. This agreement comes after much deliberation with the UK Government, record labels and film studios according to reports by The Telegraph.

With Google and Microsoft both previously being accused by the entertainment industry of turning a blind eye to piracy, this first of its kind deal will see Google and Microsoft’s Bing demote UK search results of copyright infringing websites. Under the “code of practice”, Bing and Google have agreed to remove links to infringing content from the first page of results a report by CNBC states.

The  agreement was brokered by the U.K. Intellectual Property Office (IPO), the government department that deals with patents and copyright issues, who called it a “landmark” deal.

The code is a voluntary one and the IPO will continuously monitor how Google and Bing respond over the next few months. It is thought that if there is no noticeable improvement further action will be recommended in the summer by the Business Secretary Greg Clark which could lead to legislation that imposes fines or other measures.

Jo Johnson, U.K. minister of state for universities, science, research and innovation, said in a press release on Monday that “Consumers are increasingly heading online for music, films, e-books, and a wide variety of other content. It is essential that they are presented with links to legitimate websites and services, not provided with links to pirate sites.”

On the 9th of February the code was agreed and will come into force immediately. It also sets targets for reducing the visibility of infringing content in search results by June 1, 2017. 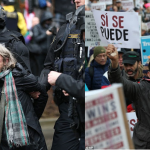