He has an academic test score that puts him in the top one per cent of students, competes as a shot putter for his school athletics team and even plays the viola in the orchestra, so it likely came as little surprise to his teachers and family that Kwasi Enin would be accepted by an Ivy League college. What might have shocked them, however, is that he got into all eight.

In a rare feat, the 17-year-old student from William Floyd High School, a state-run school on Long Island, in New York state, applied to and was accepted by Brown, Columbia, Cornell, Dartmouth, Harvard, Princeton, Yale and the University of Pennsylvania. “By applying to all eight, I figured it would better the chances of getting into one,” he told the New York Daily News. 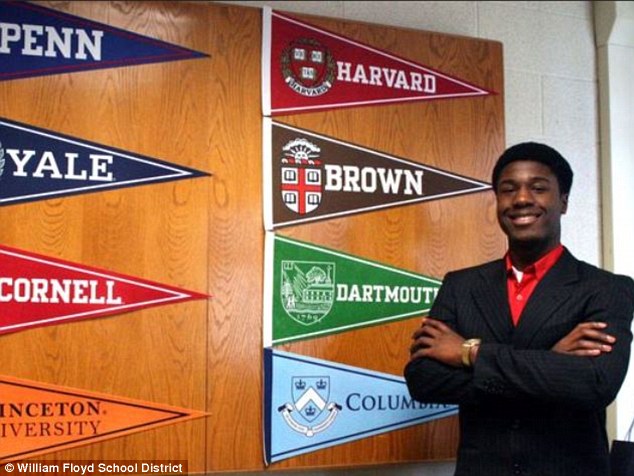 Enin’s parents are both nurses who emigrated from Ghana to New York in the 1980s. Their son also has his sights set on a career in medicine, saying he aspires to be a cardiologist or a neurologist. He already volunteers in the radiology department at a local hospital – when he isn’t scoring top marks in exams or singing in the school’s a capella group, that is.

Enin, who is ranked at number 11 in his year of 647 students in William Floyd’s schools district, comes from an academic family: some of his uncles and cousins were also accepted to more than one Ivy League college. “I’ve always thought they were far better than me academically,” he said in an interview with Long Island’sNewsday.

The Ivy League is a group of eight prestigious private universities in the North-east of the US. It takes its collective name from a collegiate athletic conference – the league in which the schools’ sports teams compete – but the term has come to refer simply to the schools themselves, which are considered among the best in the world. Times Higher Education named six of them among the top 20 in its 2013-2014  world university rankings. They are also some of the oldest schools in the US, and seven of the eight were founded during the colonial period.

Collectively, the eight colleges accepted less than 9 per cent of their applicants this year. At 5.9 per cent, Harvard has the lowest acceptance rate of any college in the country, accepting just 2,023 applicants from  more than 34,000 in 2014. Enin’s feat is particularly rare because each of the eight colleges is thought to admire slightly different qualities in its prospective students.

Enin had already been accepted to Princeton in December, but heard from each of the remaining seven schools last Thursday, 27 March, the date on which most such colleges issue their offers. The last offer came from Harvard, at around 5.30pm. “It has to be the one to reject me,” Enin thought. “They’re Harvard.” But he was wrong.

Nancy Winkler, Enin’s guidance counsellor, told the New York Daily News, “I’ve never seen anything like it in my 15 years as a high-school counsellor. He’s going to be a leader in whatever he chooses.”

Like his classmates, Enin will be expected to make his choice of college by 1 May. He was also accepted by four prestigious, non-Ivy League universities, but says he is leaning towards Yale, which is in New Haven, Connecticut. “They seem to embody all the things I want in a college: the family, the wonderful education, the amazing diverse students and the financial aid as well.”

Yale’s alumni include Nobel Laureates, Pulitzer prize winners and four US Presidents, including both George Bushes and Bill Clinton, who met Hillary Rodham (now Clinton) when they were students together at Yale Law School.

This articles was written on Tuesday 01 April 2014