Former US star boxer Mike Tyson was turned away on arrival at the Santiago de Chile airport and was to be deported to his home country in a future flight, Chilean authorities said Thursday citing lawlessness on immigration.

Mike Tyson, 51, was sent home, the investigative police said. Local media reported that the former world champion in the heavyweight category was traveling to Chile for the first time, for a TV show and various advertising activities.

“To be convicted or under investigation for any crime authorizes the Chilean Police Investigation Service (POI) to prohibit entry into Chile and it is in this context that Mr. Tyson, sentenced several times before the US justice, was banned from entering the country, “said Natalia Alvadaro, a PDI officer, to reporters. 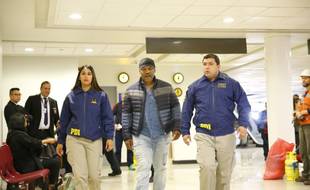 “International police detectives re-board Mike Tyson for failing to comply with the immigration law , “ said the PDI on his Twitter account on Thursday, accompanied by a photo of Tyson walking in an airport with two individuals carrying PDI jackets.

The IDP did not specify what section of the law Tyson did not respect and did not respond immediately to an e-mail and phone call seeking additional information.

Tyson, 51, has been charged with US justice several times, including three years in prison for the 1992 rape of Desiree Washington.