For the first time in American history, Lady Liberty will be portrayed as an African-American woman on United States currency.

The U.S. Treasury and Mint on Thursday, Jan. 12, unveiled the 2017 American Liberty High-Relief Gold Coin in celebration of the department’s 225th anniversary of minting U.S. coins, according to ABC News. The new coin, which will be struck in .999 fine 24-karat gold, features Lady Liberty as a Black woman wearing a crown of stars. The coin is primarily for collectors, but its face value is $100.

Inscribed on the coin is “1792” for the year the U.S. Mint was founded, along with the current year “2017” and “IN GOD WE TRUST.” The back side of the coin features an image of a “bold and powerful eagle in flight,” a press release stated. 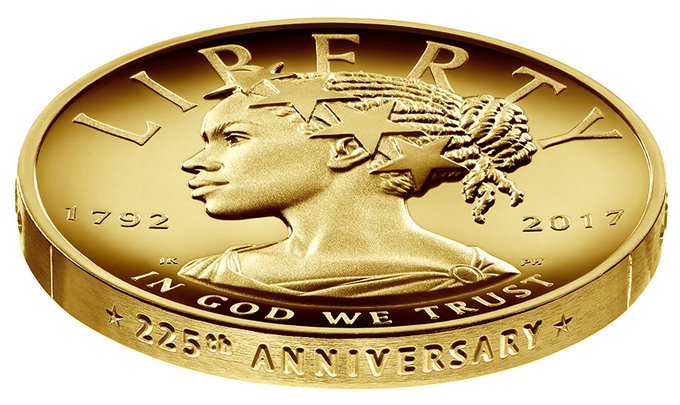 “As we as a nation continue to evolve, so does liberty’s representation,” said Elisa Basnight, U.S. Mint chief of staff, during a ceremony introducing the new coin. “We live in a nation that affords us the opportunity to dream big and try to accomplish the seemingly impossible.”

Since the Coinage Act was passed in 1792, all coins were required to feature an “impression emblematic of liberty,” in either words or images, NBC News reported. Up until the new coin designed by Justin Kunz was introduced, however, Lady Liberty had always been portrayed as a white woman.

According to the U.S. Mint, the 225th Anniversary Gold Coin is the first in a series of 24-karat gold coins depicting the allegorical Lady Liberty in a variety of designs representing Indian-Americans, Latino-Americans and Asian-Americans, among others. The latest coin featuring Liberty as an African-American woman is set to be released as a collector’s item in April, while the others will be released bi-annually, the press release stated.

The unveiling of the commemorative gold coin comes just one year after the Treasury Department announced that abolitionist Harriet Tubman would replace Andrew Jackson on the face of the $20 bill.

“Our hope is that this coin really gets people thinking and talking about what liberty looks like and represents to them,” Basnight said. “Lady Liberty, depicted in coinage throughout the years, is modeled after our society’s continued evolution and, as we as a nation continue to evolve, so does its representation.”