PwC recently published a report highlighting the prospects in the retail and consumer goods sector in ten sub-Saharan countries – Angola, Cameroon, Ethiopia, Ghana, Côte d’Ivoire, Kenya, Nigeria, South Africa, Tanzania and Zambia. Below is a condensed version of some of the study’s main findings. The full document can be downloaded here.

Key to the prospects and strategies of consumer-facing companies is the outlook for income growth in the region. In 2011, an African Development Bank (AfDB) study put Africa’s middle class at nearly 350 million. It defined the middle class as those with a daily consumption of $2-$20, although it conceded that the $2-$4 group can easily fall back into poverty. But in 2014, Standard Bank provided a more tempered assessment, saying in a group of 11 focus countries (together accounting for half of sub-Saharan Africa’s GDP) there are currently 15 million middle-class households (annual consumption of $5,500 or more).

Although there has been much debate about the true size of the middle class, and even the appropriate definition of the term itself, most analysts seem to agree that incomes are indeed rising. This view is supported by the vast majority of business leaders interviewed for PwC’s report, although several say the segment might not be growing as fast as some seem to think.

Perhaps Citigroup’s senior economist for Africa, David Cowan, provides the most instructive assessment: “We think that at least in the coming decade or so, the key consumer markets in sub-Saharan Africa will largely be low-end, with a splash of high-end colour. While there can be talk of an emerging middle class, we think it is much more logical to talk about the emergence of a new consumer market in sub-Saharan Africa. This new consumer will, for all extents and purposes, largely consume basic goods and services for the next decade or so, assuming that the overall sub-Saharan Africa growth trend remains robust.”

Business leaders point to evolving consumer lifestyles and ambitions that are influencing purchasing behaviour. Due to growth in internet penetration and travel, Africans are more connected to global trends than ever.

Time-constrained, urbanised consumers are also seeking greater convenience. In Cameroon, for example, the growing number of women entering the workforce is creating demand for easy-to-prepare food products. A decade ago in Ethiopia it was considered improper to buy pre-made injera (a spongy pancake-like flatbread central to Ethiopian cuisine) – it had to be made from scratch at home. However, these days it is commonplace to buy injera from grocery retailers.

Those who can afford it are also more health-conscious, favouring nutritious foods and monitoring their sugar intake. According to Phil Roux, chief executive officer of South Africa’s Pioneer Foods, this is a trend that cannot be ignored, and one his company takes seriously as it formulates its new products.

Across the continent there are numerous examples of indigenous companies holding their own, and even winning, against foreign competitors due to nimbler business structures and a better understanding of consumer and on-the-ground market realities.

Having become dominant players in their home markets, African champions are also boosting their presence in the rest of the continent. Faced with a saturating domestic market, South African retailers have been among the most aggressive in expanding. Supermarket group Shoprite Holdings has been one of the pioneers, having first entered Zambia in 1995. Over the years Kenyan supermarket chains such as Nakumatt and Tuskys have also expanded into the greater East African Community (EAC) region.

In the consumer goods space, it is again South African firms – such as Tiger Brands, Pioneer Foods and Distell – that are playing a leading role by either setting up local plants, acquiring companies or exporting products to the broader region. But there are also many examples from other countries: Zambian agriculture and food company Zambeef has grown into Nigeria; Angolan soft drinks producer Refriango, which has cornered the local market for non-alcoholic beverages, exports its products throughout the continent; and Kenyan FMCG producer Bidco Africa currently has manufacturing operations throughout the EAC, with its products distributed even wider.

4. Shift towards modernisation, but informal trade continues to lead

Informal retail will continue to dominate sales in sub-Saharan Africa for the foreseeable future. With the exception of South Africa and Angola, it is estimated that upwards of 90% of sales in the focus countries is through informal channels such markets, kiosks, table-top sellers and street hawkers.

The industry is, however, slowly modernising and the past decade has seen the development of numerous western-style shopping centres. In countries such as Ghana, Nigeria and Zambia, many of the malls are anchored by South African retailers. French company CFAO, in partnership with French multinational retail group Carrefour, has also announced its intention to build shopping centres in a number of West African countries. Modernisation is, however, not purely associated with shopping malls, as is being seen in Angola where some of the cantinas (small grocery shops) are developing into mini supermarkets with multiple check-out counters and a greater assortment of products.

Although modern trade is expected to continue growing, companies shouldn’t underestimate the strength of the informal sector. Didier N’Guessan, a partner at PwC in Côte d’Ivoire, says even the middle and upper-class still frequent open-air markets in the country. “I don’t think we will see the demise of the informal markets anytime soon because products in the mall are priced at a premium,” he explains.

Although online retail is still in its infancy in sub-Saharan Africa, the industry is certainly showing promising potential. While South Africa and Nigeria already has numerous e-commerce players, the industry is less developed in countries such as Cameroon and Ghana.

Due to under-developed brick and mortar retail, e-tailing holds a unique value proposition for sub-Saharan Africa, not only in terms of better pricing but also for the convenience it provides as shoppers no longer have to sit through the gridlocked traffic to reach markets or shopping malls. Online shopping may offer even greater value for those living outside the big cities where the choice of goods available may be limited. With growing internet penetration through smartphones, it is conceivable that online retail could to an extent leapfrog traditional brick and mortar trade.

Besides South Africa and Kenya, where most traditional retailers have launched online offerings, the industry is generally driven by pure e-commerce companies. Africa Internet Group is one of the most prominent. It owns numerous platforms which include Jumia (e-commerce mall), Zando (fashion) and Kaymu (marketplace) with a presence in 26 countries. A number of e-tailers have also opened up their platforms to third-party sellers, allowing any company or trader to market their products on the internet.

Successfully selling products online in sub-Saharan Africa, however, comes with multiple unique obstacles, including unreliable internet connections, logistical challenges, as well as a general distrust of transacting online and low bank card penetration, which is why most e-commerce companies allow consumers to pay cash on delivery.

Formal retailers will exploit growth and margin-enhancing initiatives such as private labels, loyalty programmes and retail credit. In less developed retail environments, the entry of regional and foreign players is expected to boost these types of initiatives as they already apply them in their home markets.

Private labels Private labels are already common in countries such as South Africa and Kenya where retailers have sufficient scale. In Côte d’Ivoire, retail group Prosuma sells home brands, such as juice and frozen foods, from French supermarket chain Casino with whom it has a partnership. In South Africa, private labels have evolved into trusted brands as opposed to merely cheap alternatives, with supermarket group Pick n Pay already having a range of tiered in-house brands, each aimed at specific consumer segments. The growth in private labels is a threat to consumer goods manufacturers and forces them to strengthen the positioning of their brands. On the other hand it also provides an opportunity for manufacturers to produce private-label products on behalf of the retailers.

Loyalty programmes Loyalty programmes are expected to become more sophisticated, and provide retailers with better consumer insights, in turn allowing them to customise electronic communication messages. The majority of South African retailers already have relatively advanced loyalty programmes, which they are slowly introducing in the rest of the continent. Kenya’s Nakumatt has launched its Nakumatt Global Card, which doubles as a prepaid debit card as well as a loyalty card through which customers earn points every time they shop. Ghanaian chain Melcom also offers 5% discount to its loyalty card holders.

Retail credit Consumer credit is already big business in South Africa, but has been relatively slow to catch on in the rest of the region, partly due to the lack of strong credit bureaus. It is, however, an area that holds significant potential. Some South African retailers have already piloted credit offerings in the rest of the continent. In Ghana, Melcom has partnered with a bank to allow customers to purchase certain items on credit.

The expansion of modern retail in recent years predominantly focused on the continent’s capitals and major commercial hubs. Second-tier cities and emerging ‘boom towns’ are now increasingly attracting interest. Sub-Saharan Africa is urbanising, but not everyone is moving to the chief commercial centres, creating opportunities in secondary urban areas.

In Nigeria, Resilient Africa is constructing malls in lesser-known cities such as Benin City, Owerri and Asaba. Furthermore, in Ghana, property developer AttAfrica is building a mall in Kumasi, an important commercial and trading centre with currently very little in terms of formal retail space.

Across the region a number of emerging ‘boom towns’ have experienced fast growth on the back of nearby mining and oil projects or other business activities. While the decline in oil and other commodity prices has impacted some of these centres, the long-term outlook remains positive.

Thousands of containers of consumer goods still arrive at Africa’s ports every month. While the continent is likely to be a significant importer for the foreseeable future, in nearly all the countries included in the report there is a growing movement towards local production. This trend is driven by various factors.

Firstly, growing democracy and stability is giving companies the confidence to invest in assets on the ground.

Thirdly, in a bid to diversify their economies and to boost job creation, governments are granting incentives for local manufacturing. 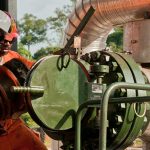 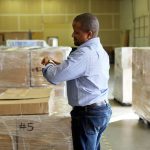