After Donald Trump sniped back at LeBron James’ suggestion that he fuels American racial divides, support has flooded in for the NBA great — including from the US president’s wife, Melania.

In an interview on Tuesday — also broadcast late Friday — Los Angeles Lakers player and philanthropist James told CNN he believed Trump “is kind of trying to divide us.”

“He’s kind of used sport to… divide us and that’s something I can’t relate to, because I know that sport was the first time I ever was around someone white. You know?” said James, who on Monday opened an elementary school for at-risk youth in his native Akron, Ohio.

For the rest of the week, Trump was uncharacteristically silent — until Friday night, when he finally shot back.

“Lebron James was just interviewed by the dumbest man on television, (CNN presenter) Don Lemon. He made Lebron look smart, which isn’t easy to do,” the president tweeted.

His comment sparked huge reaction from James’ supporters — but the most surprising came from First Lady Melania Trump, whose communications director issued a statement that appeared to break ranks with the president.

Stephanie Grisham was quoted by CNN as saying James appeared to be “working to do good things on behalf of our next generation.”

“Just as she always has, the First Lady encourages everyone to have an open dialogue about issues facing children today,” she said.

Grisham added the first lady “would be open to visiting” James’ new school.

“Who’s the real dummy? A man who puts kids in classrooms or one who puts kids in cages? #BeBest”, Lemon tweeted, using the hashtag of her youth wellbeing awareness campaign, which advocates against cyberbullying.

Sports stars rally
Elsewhere, Trump’s former Democratic rival Hillary Clinton backed James as a “great family man” and “incredible ballplayer” who “gives back to his community, and isn’t afraid to speak his mind.”

“He’s a world class athlete and a class act. We need more like him in this world,” she tweeted.

“We got your back @KingJames Someone sure sound like they wish they was you,” tweeted linebacker Bobby Wagner of the NFL’s Seattle Seahawks.

Even NBA icon Michael Jordan — known for his reluctance to comment on political and societal matters in his prime — weighed in, after Trump closed his tweet saying “I like Mike!”

“I support LJ,” Jordan, now the owner of the NBA’s Charlotte Hornets, said in a statement released through his publicist. “He’s doing an amazing job for his community.”

But James himself steered clear of the matter on social media, on Saturday tweeting only a picture of students at his new school with the message: “Let’s get it kids!! Love you guys.”

This weekend’s controversy was just the latest in a long-running feud between James and the president.

In June, Trump said that neither the Cleveland Cavaliers — James’ previous team — nor the Golden State Warriors would be invited to the White House following the NBA Finals.

He was responding to remarks by then-Cavs star James as well as Curry, who both said they would not attend a White House reception.

James described Trump as a “bum” following the furor. 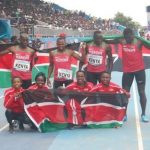