Deontay Wilder knocked out Dominic Breazeale in a single round.

Deontay Wilder just sent a chilling message to the rest of the heavyweight division.

The big-punching American lived up to his status as one of boxing’s most feared knockout specialists, by sending his Saturday opponent Dominic Breazeale crashing to the canvas in the very first round.

Breazeale had been on a three fight winning run having stopped Izuagbe Ugonoh, Eric Molina,, and Carlos Negron before the final bell, after suffering his first professional career loss to Anthony Joshua in London, England, in 2016.

But Wilder beat Breazeale far easier than Joshua managed, and he scored his knockout win with a simple but horrifyingly effective two punch combination after little more than two minutes of World Boxing Council competition at the Barclays Center in New York.

Wilder closed the distance between himself and Breazeale with canny footwork, threw a distance measuring jab at Breazeale with his left, then followed up with a powerful right that Breazeale never saw coming. A right hand launched with such venom it buckled Breazeale’s knees and lay him flat on the deck, defeated.

Finishing Breazeale was Wilder’s 40th victory by knockout, his 41st win in total.

Wilder, who had attracted controversy this week because of his “get me a body” comments, later said he welcomes a challenge from the unified champion Joshua, and would even be willing to watch the Englishman defend his belts against Andy Ruiz Jr. on June 1 at Madison Square Garden in New York City.

“I think it [a fight with Joshua] will happen,” Wilder said in the ring, on the Sky Sports broadcast . “The heavyweight division is lit right now. And it is our obligation and our duty to give the fans what they want. The next time the discussions will come around, something will get done.” 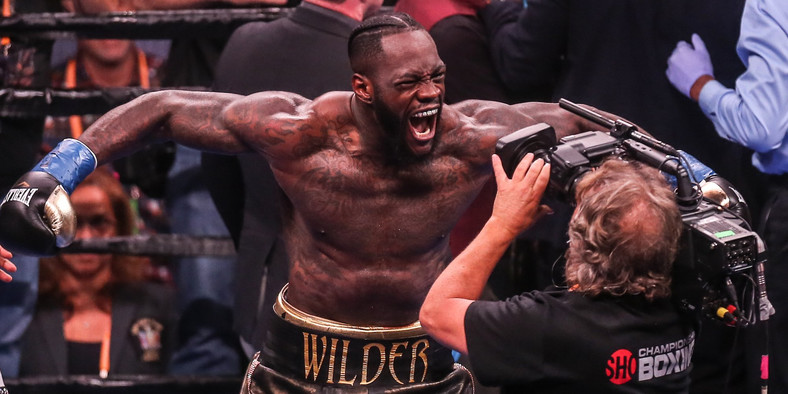 Breazeale’s performance was criticized by the heavyweight great Lennox Lewis on Twitter, who said : “It didn’t seam like Breazeale brought much to the table.” He added: “Don’t know what he was doing with the left hook, don’t wait on a puncher.”

Lewis then praised Wilder’s “devastating power,” a skill that was also commended by the UFC fighter Conor McGregor who called it a “demolition job.”