In one of the most amazing stories of modernity reviving the beauty of the past, a centuries-old West African martial art sport known as dambe has seen growing interest thanks to YouTube.

Although we do not know when the Hausa of West Africa invented dambe, elders in Hausa communities say it has been around since European colonization.

The martial art sport is popular among the Hausa in northern Nigeria, southwestern Chad and southern Niger. But in modern times, other communities are becoming bigger fans too.

Fighters in a typical dambe match, men only, try to force each other into total submission usually within three rounds. Kicks and punches are allowed, as well as the use of brute strength.

Fans gather around the fighters forming a circle to cheer on the combatants. It is not uncommon to see both fighters and their fans coming to matches wearing spiritual charms in order to sway the bouts their way.

At stake is the pride of being a champion and certain material rewards.

In many ways, what happens in the West African sands during a dambe match is no different from a UFC ring. Pain has to be inflicted.

Dambe was dominated by Hausa butcher caste groups, those traditionally in the less privileged of the social classes. But over the last century, the sport has evolved to allow for other groups of people.

This also means men from other ethnic groups other than Hausa could be found within the dambe circles.

Perhaps the resurgence of dambe is owed to the internet, particularly YouTube, more than anything else.

Multiple YouTube channels are dedicated to showing clips or full fight videos. Dambe Unlimited and Dambe Warriors are two of such channels with tens of thousands of subscribers and millions of views.

Dambe fighters have also become younger, some in their early teens. Throughout the year, they are found in gyms training in hopes of becoming champions in the sport of their forefathers. 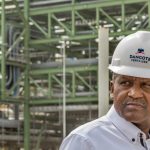