Many African countries have been praised for waging an effective campaign to combat the spread of coronavirus despite their reputation for having fragile state heath systems.

The continent, which has a population of more than one billion, has had about 1.5 million cases, according to data compiled by the John Hopkins University.

These figures are far lower than those in Europe, Asia or the Americas, with reported cases continuing to decline.

“The case-fatality ratio (CFR) for Covid-19 in Africa is lower than the global CFR, suggesting the outcomes have been less severe among African populations,” noted a recent continental study by Partnership for Evidence-based Response to Covid-19 (PERC), which brings together a number of private and public organisations.

Low testing rates continue to undermine the continental response however, there is no indication that a large number of Covid-19 deaths have been missed, said Dr John Nkengasong, the head of Africa Centres for Disease Control and Prevention (Africa CDC).

So what are some of the reasons for Africa’s relatively low death rate?

The first case on the continent was confirmed in Egypt on 14 February. There were fears that the new virus could quickly overwhelm largely fragile health systems on the continent.

So, right from the beginning, most African governments took drastic measures to try and slow the spread of the virus.

Some countries – like Lesotho – acted even before a single case was reported.

It declared an emergency and closed schools on 18 March, and went into a three-week lockdown about 10 days later in unison with many other southern Africa states.

But only days after the lockdown was lifted – in early May – did Lesotho find its first confirmed cases. In a population of more than 2 million, it has so far recorded about 1,700 cases and 40 deaths.

In a survey conducted in 18 countries in August by PERC, public support for safety measures was high – 85% of respondents said they wore masks in the previous week.

“With strict public health and social measures implemented, African Union member states were able to contain the virus between March and May,” the report said.

It added that “minor loosening [of restrictions] in June and July coincided with an increase in the reported cases across the continent”.

Since then, there has been a notable drop in the number of confirmed cases and deaths in about half of the continent, possibly linked to the end of the southern hemisphere winter (see below). 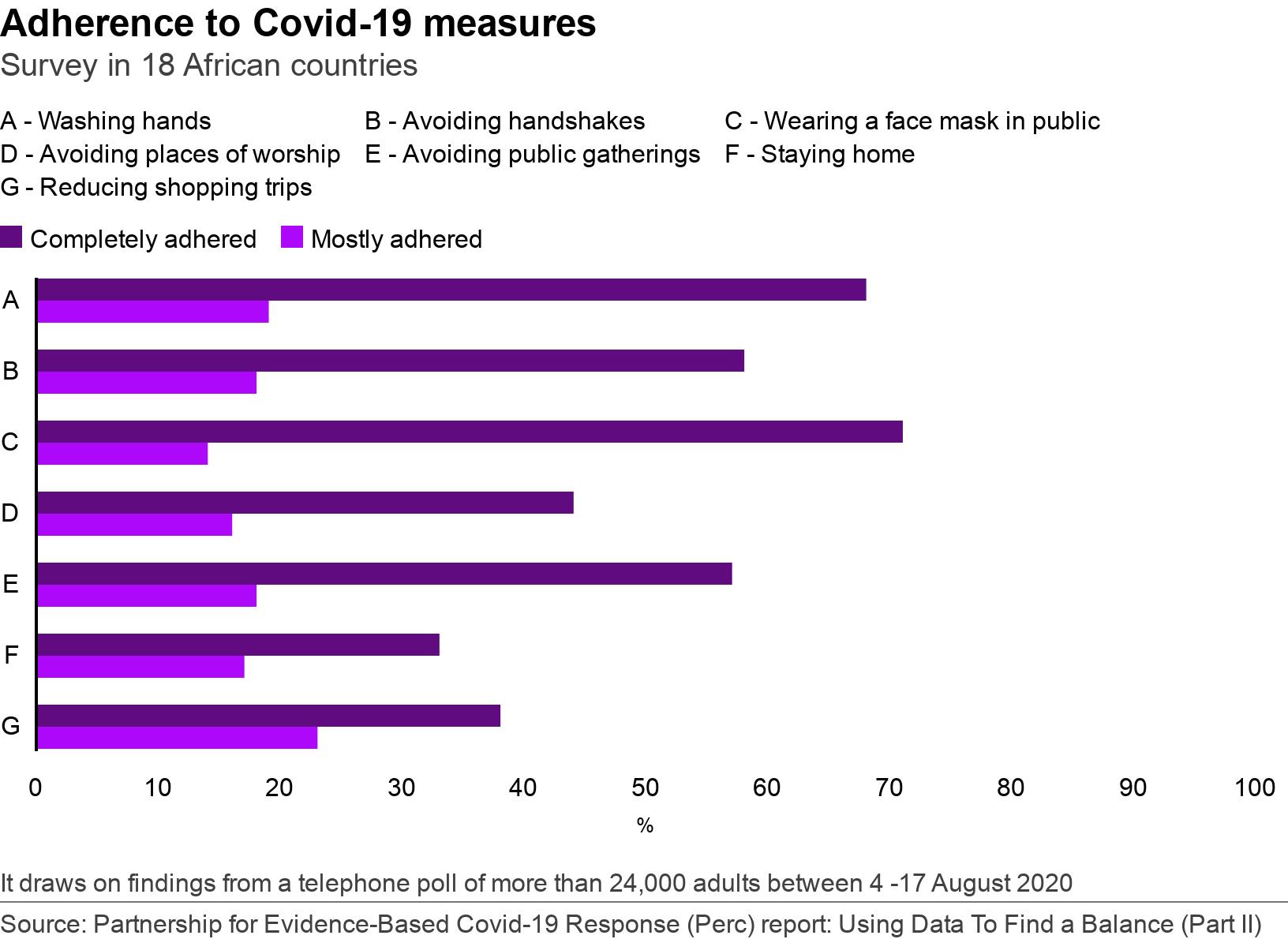 The implementation of the restrictions came at a huge cost. Livelihoods were lost on a large scale. South Africa – which had one of the most stringent lockdowns in the world – lost 2.2 million jobs during the first half of the year.

More and more countries have been forced to re-open their economies even though the number of cases is much higher than when they ordered the shutdowns.

According to the PERC report, public opinion about re-opening the economy was mixed – six in 10 respondents said economies needed to re-open, and believed that the risk of getting Covid-19 was minimal if social distancing rules were followed.

However, seven in 10 said that thinking about resuming normal activities made them feel anxious.

“The data suggests that people across the AU see Covid-19 as a serious threat, but for many, the economic and social burdens outweigh their personal risk perception of catching the virus,” concluded the report.

The age of the population in most African countries is also likely to have played a role in containing the spread of Covid-19.

Globally, most of those who have died have been aged over 80, whileAfrica is home to the world’s youngest population with a median age of 19 years, according to UN data.

“The pandemic has largely been in younger age groups… about 91% of Covid-19 infection in sub-Saharan Africa are among people below 60 years and over 80% are asymptomatic,” said the World Health Organization (WHO).

“We have [in Africa] about 3% of the population aged over 65 years,” sad Dr Matshidiso Moeti, the WHO Africa head.

In comparison, Europe, North America and wealthier Asian countries have the oldest inhabitants.

“One of the big drivers in Western countries is that the elderly people were living in specialized homes and these became places where the transmission was very intense,” Dr Moeti added.

These homes are rare in most African countries, where older people are more likely to be living in rural areas.

It is the norm in many African countries for people to return to their rural homes when they retire from employment in urban areas.

The population density in rural areas is lower and therefore maintaining social distance much easier.

Furthermore, an underdeveloped transport system within and between countries appears to have been a blessing in disguise. It means that Africans do not travel as much as people do in more developed economies, minimising

A study conducted by researchers in the University of Maryland in the US found a correlation between temperature, humidity and latitude, and the spread of Covid-19.

“We looked at the early spread [of the virus] in 50 cities around the world. The virus had an easier time spreading in lower temperatures and humidity,” said Mohammad Sajadi, the lead researcher.

“Not that it doesn’t spread in other conditions – it just spreads better when temperature and humidity drop.”

African countries away from the tropics have been worse off.

The spread of the virus accelerated in South Africa as the southern hemisphere went into winter.

The Covid-19 pandemic came at a time when the Democratic Republic of Congo was dealing with its biggest outbreak of Ebola yet. Neighbouring states were on high alert, and the health screening of travellers for Ebola was extended to include Covid-19.

Several West African states – which battled the world’s worst ever outbreak of Ebola from 2013-16 – had also mastered the public health measures that have been used to prevent Covid-19, including isolating the infected, tracing their contacts and then getting them quarantined while they get tested.

Furthermore, in Africa’s most populous state, Nigeria, teams that had been going into villages to vaccinate children against polio were quickly re-purposed to educate communities about the new pandemic.

This is a point that Dr Rosemary Onyibe, who had been working on the polio eradication programme, made in April:

“Once I heard the news, I instantly thought: duty is calling. My expertise is needed to serve my community.

So, while hospital infrastructure in much of Africa is less developed than in other parts of the world, the continent’s strength lay in its tried and tested community health systems.

But all this doesn’t mean that people in Africa can afford to relax.

“The slower spread of infection in the region means we expect the pandemic to continue to smoulder for some time, with occasional flare-ups,” Dr Moeti said.