China wants to expand the sale of African agricultural products across its e-commerce platforms, according to a senior Chinese foreign ministry official.

To coincide with the new China Africa Cooperation forum to be held in Senegal at the end of 2021, China will encourage e-commerce, particularly livestreaming platforms, to promote the export of agricultural products from the continent to China, according to the government statement.

Trade volume between China and Africa reached $139.1 billion in the first seven months of the year, in which the imports from Africa were $59.3 billion, according to China’s ministry of commerce. 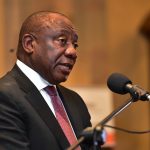