An Ugandan legislator has said he was paid a great many dollars with a specific end goal to help expand the three-decade run of president Yoweri Museveni.

Robert Kyagulanyi, a government pundit and a singer otherwise called Bobi Wine, said he got 29 million Ugandan shillings ($8,000) so as to help a proposition to scrap a clause barring anybody beyond 75 years old from running for the nation’s most noteworthy office.

President Museveni, 73, who has ruled since 1986, will be two years over as far as possible when the nation holds its next race in 2021.

For months now, Ugandan MPs allied with the state have lobbied to table the bill in parliament, and engaged their constituents across the country in order to popularize the move.

Wine said the “bribe” was given to all members of parliament, and that he asked his bank to return the money to its sender. “This money is being spent on a matter that does not need any consultation whatsoever,” Wine said in a Facebook post. “Ugandans made it clear long ago that they are opposed to a life presidency. They don’t want the constitution tampered with in any way.” 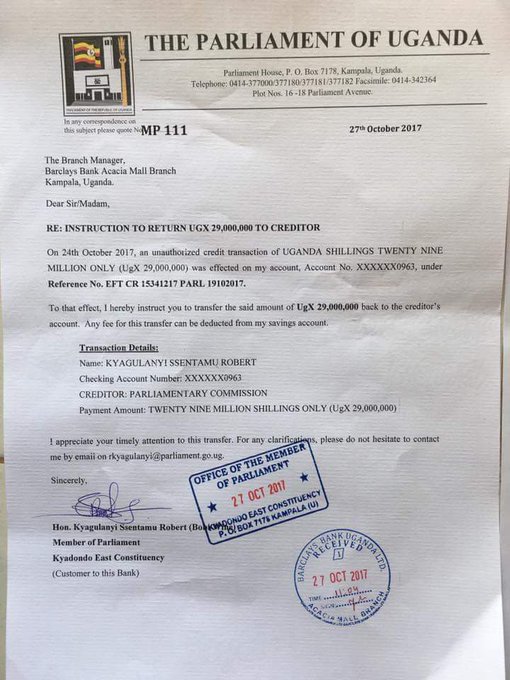 The government has responded to the criticism of the age limit amendment by banning protests. In late September, a huge brawlinvolving fistfights and kicks also broke out in parliament between those opposing and those in favor of the bill. For Wine and other opposition figures, their disapproval has also come at a cost: grenades were thrown into their homes.

Wine says the government is wasting a lot of money paying off politicians instead of spending it on improving public services. “We cannot be seen to legitimize the wanton waste of public resources by accepting this money for whatever reason. Where are the priorities?” he asked. “Think about this: how many schools or hospitals can that money build? How many ambulances? Yet whenever citizens demand for some basic entitlements, the government is always singing, “there is no money.” Shame.”