The third edition of this competition electing women to the larger posterior expected last Friday, was canceled following of online denouncing its degrading remarks to the woman.

The poster, a photomontage, is particularly explicit. Two women, with particularly generous buttocks. At stake for the winner and her runner, two prices: a motorcycle and a TV .. In Burkina Faso , the third edition of the contest “Miss Bim Bim”, rewarding the woman to the biggest posterior, was canceled at the last minute by the government after the protests of online deploring sexist ceremony. The competition was originally scheduled Friday. 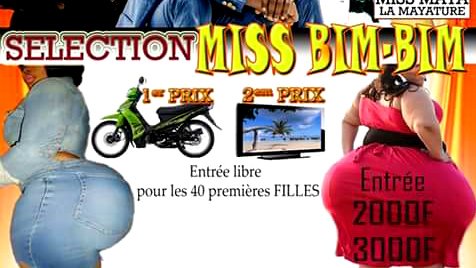 “Our role is to do all to avoid degrading the image of women,” said the Burkinabe Minister of Women, National Solidarity and Family Laure Zongo in a statement. She added that criticism from social networks have convinced her of his decision.

Laure Zongo had indeed previously summoned the musician Bazié Firmin says Agozo and his staff to better understand the concept of this ceremony during a dedication concert of the artist.

“I think it rather promotes women”

For one of the organizers of the event, however, the competition aims to promote a more positive body image of African women. It also encourages designers fashion to use African costumes. “Miss Bim Bim means a woman corpulent. It’s not a bum deal. Women in traditional dress parade and not scantily clad. And I think that rather values the woman,” had estimated Hamado Doambahe, quoted byRFI .

As stated in, similar competition to the Miss Bim Bim however held in other West African countries.