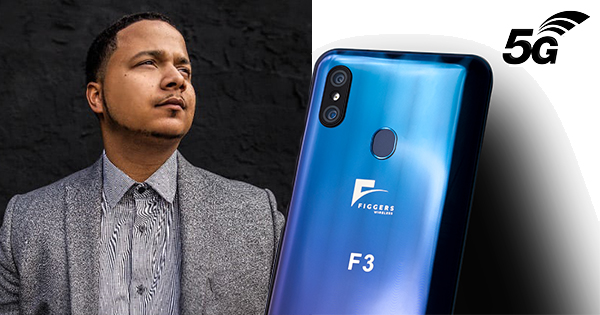 Black inventor, and self-taught software engineer, Freddie Figgers, has released the newest phone from his telecommunications company, the Figgers F3. Changing the narrative of the smartphone as we know it, the F3 comes equipped with record-breaking storage capacity of 1TB, meaning users will never run out of storage, and a 4K ultra high-definition screen.

Paired with a sleek design, the F3 will also come with magnetic resonance capability, allowing users to charge multiple Figgers Gear from the Figgers Super Base Charger. It is built to work on every mobile operator in the world, not just USA and comes with waterproof capability.

Figgers comments, “The Figgers F3 is the most technically advanced device for the most affordable price.”

The only Black owned telecommunications company in the country, Figgers Wireless was founded in 2008, providing services to individuals all over the world. The Florida-based company which offers smartphone calling and data plans, includes 4G phones, the Figgers F1 and F2, along with wireless accessories. Its newest device, the F3, also includes a Guest profile that would allow consumers to share their phone without worrying about their privacy being breached, making it convenient for business and personal use.

The Figgers F3 has been highly anticipated, with young entrepreneur Freddie Figgers introducing a smartphone that is affordable and can stand up against its competition. Keeping up with the advancement in technology, the F3 also features biometric and facial recognition for security, along with an 18-megapixel camera with 8-megapixel optical zoom. Consumers will also be able to track their health goals and progress through Figgers created health applications on the device. The device also has the capability to translate over 100 languages, making it an asset to business and personal communications on an international level. The Figgers F3 is currently available for order.