A Black entrepreneur who is into selling luxury hair has been accused by a White woman of selling drugs. A viral video on TikTok shows Ronnie Marie Paiva, owner of Marie’s Luxury Hair Extensions, making a delivery to a client in Sacramento on her bicycle.

The video, shared by a TikTok user by the name @prettii_tb, shows the unnamed White lady approach Paiva, enquiring from her if she is selling drugs. According to the White woman, she is giving Paiva a heads up because her drop-offs to her client look like a drug deal.

Paiva insists that she should call the police if she feels she is selling drugs, adding that she lives in the neighborhood and pays $50,000 in taxes. The White woman goes on to question Paiva why she won’t do her business at home instead of riding her bike to the public park.

“Because I can. It’s a public park,” Paiva shoots back. She then shows the White woman the items in her bike basket containing a bundle of hair and other accessories.

Still holding on to her unfounded position, the White woman claims that everyone in the neighborhood was talking about the “girl on the bike” selling drugs. She is heard in the video saying that she is not going to call the police but cautions Paiva that someone else might. According to the White woman, she is only giving Paiva a “heads up.”

In a later video, Paiva noted that the incident happened in June, adding that she has since received overwhelming support after the video went viral.

In an interview, she noted that she was grateful for the experience and that Jesus turned the moment into glory for her. She further noted that the White woman’s insinuations against her were unfounded because she was not who the woman wanted to portray her.

“When you know who you are, where you came from, and where you’re headed … you don’t let anymore take you out of your character,” she said. “I don’t know if she was a racist or not, but I know she was ignorant and nosey.”

Despite the incident and the supposed suspicion, her business draws, Paiva said she is not going to stop using the park for pickups. According to her, she has not received any complaints from her neighbors, some of whom have bought her products. 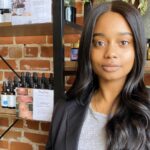