Gary McSween is an entrepreneur and hails from Trincity, Trinidad. Gary worked in the oil and gas industry for more than nine years after obtaining a bachelor’s in Process & Utilities Engineering. In 2011, Gary was introduced to network marketing and he is currently the CEO of iBelieveVentures, which provides leadership coaching.

Gary has always had doubts about motivational tactics and the inspiration people find in motivational speaking. This was before he attended an event in Dallas, Texas and met with the multiple seven-figure earner David Imonitie, his now mentor.

ALSO READ:  Good Friday's Quote- We Will Have Peace Even If It Means Fighting For It, Dwight Eisenhower

Gary said after that meeting, his belief system exploded. “Came back to my home and started building aggressively,” he said.

Gary was awarded a ‘Rookie of the year’ within two years in his first company. In his second company, he became one of the fastest to make $25,000 per month in residual income. He went on to achieve $1 million within 16 months.

Gary said he went on to build a sales and marketing organization with over 10,000 customers and IBOs in 45 countries, including Trinidad, Jamaica, U.S.A, Canada, Nigeria, South Africa, London, Dubai, Netherlands, South America and several Caribbean islands, with annual sales of tens of millions of dollars.

Despite his success, the journey has not always been smooth sailing for Gary. According to him, his biggest challenge was self-belief. He noted that he never believed in the power of believing. However, his experience alongside mentorship has helped him gain confidence in understanding the process of believing. He now empowers others to find that belief in themselves.

“…Believing that you can do it, once you believe you can do it and it’s the right vehicle anything is possible. Success is a moving target. Success for me is not the destination but is the path to the destination. There are so many people my age with less education who are having the massive success that most in the corporate world would not earn or even think about” Gary explained.

The leadership coach also said his business took a hit with product prices and a lack of fulfillment by the company. According to Gary, this drastically affected his income and he struggled to pay his rent and put food on the table. But thanks to his mentor, he overcame those challenges.

In a piece of advice, Gary said potential entrepreneurs should make their goals clear and also find a mentor who has achieved success in the area they are venturing.

“Listen to exactly what they say to you to do. Do it until you win. Success is also 90 – 99% mental and 1 – 10 % Skill. If you don’t win the battle in the mind you will not win in the physical. Success in all you do happens in the mind first.” Gary advised. 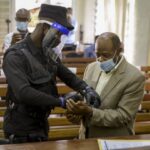