Every April, one day is set aside for Equal Pay Day — a calendar day symbolizing how far into the year women must work to earn the same wages made by men in the previous year. It’s also an annual reminder of the pressing need to close America’s widening wage gap.

In the U.S., women make just 79 cents for every dollar a man earns. The wage disparity is even larger for working Black women. Hence the need for African-American Women’s Equal Pay Day, which falls on Aug. 23 of this year.  According to the Huffington Post, this is the day when Black women finally catch up to what white men earned last year.

On average, Black women are paid 63 cents for every dollar white men make. This means Black women are required to work roughly eight more months just to pull in the amount white men earned by Dec. 31 of last year.

A recent report by the National Women’s Law Center found that African-American women are slated to lose more than $877,000 over a 40-year career compared to their white male counterparts.

“African-American women shouldn’t need to work more than 66 years to earn what a white man earns in 40 years,” said Emily Martin, vice president for workplace justice at the NWLC. “If we don’t act now to ensure equal pay, for many women of color, the cost of the lifetime wage gap will surpass a million dollars. We literally can’t afford to ignore this.”

The report notes that the wage gap affects women across all fields, and that even highly educated Black women still face wage discrimination.

“African-American women with a bachelor’s degree typically make $46,825 per year – only $1,849 more than white men with only a high school degree,” the NWLC stated.

Martin also points out that African-American women are over-represented in low-paying jobs and under-represented in high paying ones, like engineering. A similar report by the American Association of University Women found that Black women often work shorter hours due to family and work life demands. Lack of access to paid sick leave days doesn’t help either.

According to The Guardian, Democratic presidential nominee Hillary Clinton has joined the fight for equal wages by demanding increased transparency around pay in the private sector as well as expressing her support of the Paycheck Fairness Act.

“If talking about equal pay and paid leave and more opportunities for women and girls is playing the gender card, then deal me in,” Clinton said earlier this year on Equal Pay Day.

For a black woman to earn same income as her white male counterparts in 2016, she would need to work an extra 210+ days#BlackWomenEqualPay

68% of black households are headed by women. Wage disparity based on gender and race hurts families and communities.#BlackWomenEqualPay 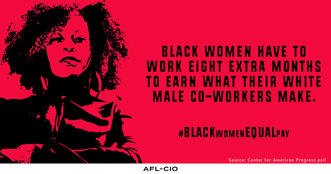