On Monday, Tulsa police released a video of the shooting and killing of Terence Crutcher, a black man who had stopped his vehicle in the road.

One of the witnesses told 911 that Crutcher ran from the car, stating it was going to explode. “I think he’s smoking something,” said the caller.

In the video, Crutcher appears to walk away from the police with his hands in the air, back toward his vehicle; he then leans into his vehicle, at which point officers obscure the view and his hands are obscured by his proximity to the vehicle.

A female officer then shot and killed him. She said in the dispatch recording, “I’ve got a subject that won’t show me his hands,” although the video shows Crutcher with his hands up. “Time for a taser, I think,” said one officer as four other officer surrounded him. “That looks like a bad dude, too,” said another officer. 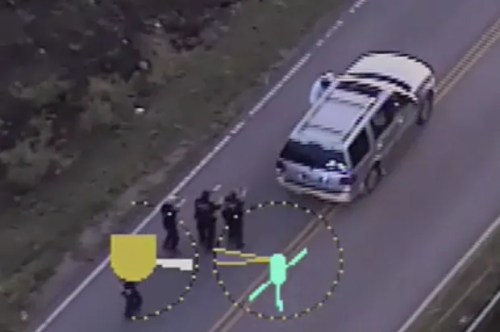 After the female officer shot Crutcher, video shows her crumbling to her knees and other officers surrounding her to console her.

The FBI and Department of Justice have already announced investigations.

The reaction on social media has been virtually unanimous.