What can you expect from Africa’s exhibition schedule in 2015? Retrospectives of the popular works of Penny Siopis, Peter Schütz, Malika Agueznay and Alice Elahi are just a few of the highlights. These upcoming exhibitions offer a diverse array of techniques and media, showcasing the talents of many artists, from newly emerging stars to well-established icons. Here is a selection of some of the best African art shows on the 2015 calendar to please all art lovers.

Basim Magdy, “The Cautious Passing of Light Through Endless Layers of Forgiveness”, c-print from a chemically altered negative on metallic paper, 82 x 100 cm, 2014 | Image courtesy of the artist and Gypsum Gallery

Pioneer of contemporary Moroccan art, Malika Agueznay was educated at Casablanca’s Ecole des Beaux-Arts in the late 1960s and has since exhibited internationally. Her retrospective exhibition at Villa des Arts showcases her trademark colorful works featuring dream-like shapes in entrancing compositions. Appearing abstract at first, these creations are often inspired by organic forms, like seaweed, or what she refers to as ‘algae.’ In a nod to Moroccan culture, Agueznay’s paintings and engravings sometimes feature Arabic script as a stylized calligraphy. Presented by the cultural platforms La Fondation CDG and La Fondation ONA, this eye-catching retrospective is displayed in the elegant gallery of theArt Deco-era Villa des Arts de Casablanca.

The South African National Gallery is the prestigious venue for ‘Time and Again,’ the much-anticipated retrospective of works by Penny Siopis, one of the country’s best-known artists. Siopis portrays personal and collective histories, sometimes using the placement of mysterious objects to comment on issues surrounding gender, colonialism and discrimination. The passing of time is a key theme in her works, which often explore feelings of shame and loss, or the trauma experienced by South Africans. This exhibition surveys a broad selection of Siopis’ artistic output, from early ‘Cake’ paintings, to her ‘History’ paintings, ‘Shame’ and ‘Pinky Pinky’ series. More recent ink and glue paintings will also be on show, as well as thought-provoking films and object-filled installations.

Stevenson gallery in Cape Town hosts a new solo show by South African, Kemang Wa Lehulere, who was chosen as the 2015 Standard Bank Young Artist for Visual Art. Titled ‘To whom it may concern,’ the exhibition is a response to the Fluxus-style piece named ‘Spatial Poem No 3 (Falling Event)’ by Japanese artist Mieko (Chieko) Shiomi. Using sculpture, video and other media, Wa Lehulere explores the idea of falling, both literally and metaphorically, whilst connecting real moments in space and time. Running simultaneously is an exhibition called ‘Space Minding’ by the internationally renowned sculptor and installation artist Olafur Eliasson. At Stevenson, he presents works that cleverly manipulate light with a lens, or investigate visual effects using colored planes of glass.

Basim Magdy, “Fate Brought Us to the Shores of a Lava Lake at Dawn (no. 1)”, c-print from a chemically altered negative on metallic paper, 82 x 100 cm, 2014 | Image courtesy of the artist and Gypsum Gallery

Gypsum Gallery presents Basim Magdy’s solo show ‘Measuring the Last Breaths of Time on a Fading Scale.’ The relationship between time and nature is highlighted in a series of sublime landscapes, where colors are distorted by exposing photographic film to household chemicals. A short cinematic film shot on Super 8 is the second component of Magdy’s mind-stretching exhibition. Called ‘Time Laugh Back at You Like a Sunken Ship’ (2012), it features a young man exploring a botanical garden through a series of reflections, blending together reality, memories, apparitions and the unconscious in a universe where time is an atmospheric space. The works of Egyptian-born Magdy have featured in numerous international shows and won awards such as Dubai’s Abraaj Art Prize 2014.

Rembrandt van Rijn’s etchings, on display at the Old Town House, are amongst some of the finest works to emerge from the 1600s. Yet his artistic pursuits were not fully appreciated until almost two centuries later. This exhibition brings together Rembrandt’s prints from major institutional collections in South Africa, celebrating their innovative and experimental quality. As the title of this exhibition claims, Rembrandt was certainly a ‘Pioneer Printmaker of Humanity and Modernity’ as well as a masterful painter. The Cape Rococo building of the Old Town House is also home to the Michaelis Collection, a historically important selection of works by Dutch and Flemish masters from the 16th to 18th centuries.

Pretoria-based Alice Elahi has depicted the dramatic natural beauty of African scenery since falling in love with Namibia in the 1980s. A retrospective of her work, titled ‘Landscape Through An Artist’s Eyes,’ will be on display at The Pretoria Art Museum, which specializes in national art. Having studied in London under Zdzislaw Ruszkowski, Elahi returned to South Africa, becoming one of the country’s much-loved landscape artists featured in various public and private collections. Working in watercolor, mixed media and oil, Elahi’s early figurative pieces are later complemented by studies of flowers, the Cape coastline and African Bushveld. Yet her most common subject has been the wilderness ofNamibia’s desert interior and Skeleton Coast.

8.‘NEXT TO HERE’ at B’chira Art Center, near Tunis, Tunisia

‘NEXT TO HERE’ presents the works of 19 emerging photographers from North Africa and the Middle East. The young photographers were selected from ten workshops in ten cities across the region between 2013 and 2014. German and Arabic photographers conducted the workshops, which initially focused on the relationship between humans and nature. ‘NEXT TO HERE’ is the result of collaborations between several cultural organizations being presented at B’chira Art Center, a stylish new venue for contemporary art in Tunisia. A project conceived by artist Bchira Triki Bouazizi, the B’chira Art Center has a multi-disciplinary approach to the arts, offering workshops, events and large, modern exhibition spaces both indoors and outdoors.

Born in Pretoria in 1982, Lionel Smit developed a well-regarded reputation for his contemporary portraits soon after leaving art school at Pro Arte Alphen Park. He is best known for his bold close-ups of faces produced on large-scale canvasses or as textured sculptures. Smit has exhibited widely in South Africa and at global art fairs. His painting Kholiswa (2013) received the Visitors’ Choice Award and featured on publicity material for the BP Portrait Award 2013. Smit’s highly collectable works appear in a solo exhibition at Cape Town’s Everard Read gallery in February. Founded in Johannesburg in 1913, Everard Read is South Africa’s oldest commercial gallery, showcasing the talents of both established and emerging contemporary artists from home and abroad.

The Wits Art Museum pays tribute to the German-born artist Peter Schütz (1942 – 2008) with an exhibition of his iconic sculptures. Despite living a quiet and modest life, Schütz was an acclaimed sculptor and teacher, maintaining studios in KwaZulu-Natal and at the University of the Witwatersrand (Wits). His early work addressed issues such as environmental degradation, later followed by pieces concerning religion, the female form and the dignity of labor. Schütz worked predominantly with wood, carving and painting beautiful sacred-looking beings, which exposed his fascination with ritual. He became well known for paying homage to workers in under-appreciated professions, depicting rick-saw pullers and waiting staff as saintly figures, in his favorite jelutong wood. 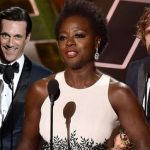 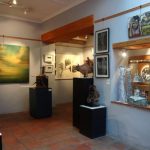