Famous Nigerian businessman Aliko Dangote has made a major donation to the Barack Obama Foundation. According to the list of donors that has been made available to the press, Aliko Dangote has donated a little more than a million dollars to the Obama Foundation, whose project focuses on the construction of the Barack Obama Presidential Center in Chicago.

The construction will be done precisely at Jackson Park south of Chicago. The project consists of setting up a real estate complex that will accommodate the Presidential Library of the 44th President of the United States, as well as a museum. 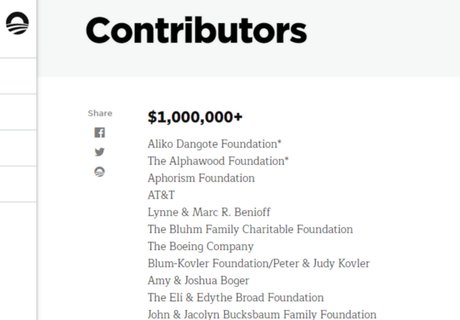 It must be said that the Obama Foundation does not really spread out the details of the amounts received. It only reveals the range of donations without specifying the exact amounts. Several other donors have been registered as having donated more than $ 1 million. The world’s third-best fortune Bill Gates, fourteenth-ranked world fortune Sergey Brin, and Oprah Winfrey. Microsoft President John W. Thompson also made a personal donation whose content was not disclosed.

Given Aliko Dangote’s cordial relations with Barack Obama, he was well advised to support the project to build this foundation. Aliko Dangote had been received several times at the White House in private hearings. In July 2018, Dangote was Obama’s guest at the “Nelson Mandela Annual Lecture”.