Let’s be honest. When we think about a business opportunity in Africa, we usually go along with the prospects that are widely highlighted in the media. The…..let’s call it….more obvious stuff. But there are extremely profitable business niches hardly anyone talks about.

Well exactly, you guessed it, that’s where come in.

Today, I want to make you aware of  the profitable business and investment opportunities in Africa’s leather industry! The opportunities are huge, underdeveloped, hardly recognized, and lucrative. You will love this!

Having worked with nomadic communities and agro-pastoralists in the Horn of Africa in an international development and food security context for over a decade, commercial leather development is a subject close to my heart. While African governments and NGOs by and large have poured their policy focus and resources into the development of crop agriculture (some more so than others), the livestock sector has remained chronically disregarded.

Now here comes the irony of this: Africa has the largest livestock number and density on the planet! Almost every African farmer also owns some kind of livestock, and some African countries have more livestock than people !

And the skins and hides ?

Yep, they get thrown away in huge quantities. Wasted. In the meanwhile: Africa spend millions to import its leather! It’s a tragedy (and by the way, the same is the fact with milk production!)

In which African markets to invest for leather

Frankly, if you are ready to operate among pioneers, almost every African country has some potential to become a market for leather production, leather goods manufacturing, and export.  But in today’s post I want to make you aware of three countries among the countries with the best potential.

There is no doubt about this, Ethiopia is the leading leather production market in Africa with a clear plan to develop this industry, which has huge potential for investors. While leather exports stood at USD 123 million in 2012, the government wants to grow the leather industry’s annual exports to USD 500 million by the end of 2015.

It is good to see that Ethiopia is making the most of its more than 100 million cattle, sheep, goats – more livestock than it has people – by actively developing and promoting opportunities in this industry.

Most of Ethiopia’s leather products go (in this order) to Italy, China, the United Kingdom, and India – among them some luxury brands.

While the business environment in Ethiopia can be very challenging for you as a newcomer, Ethiopia has the advantage of cheap labour costs (US$ 35 -45 a month in a leather factory) and low electricity costs compared to other African markets. It also has the most advanced industry and very skilled artisans and labourers in this regard. 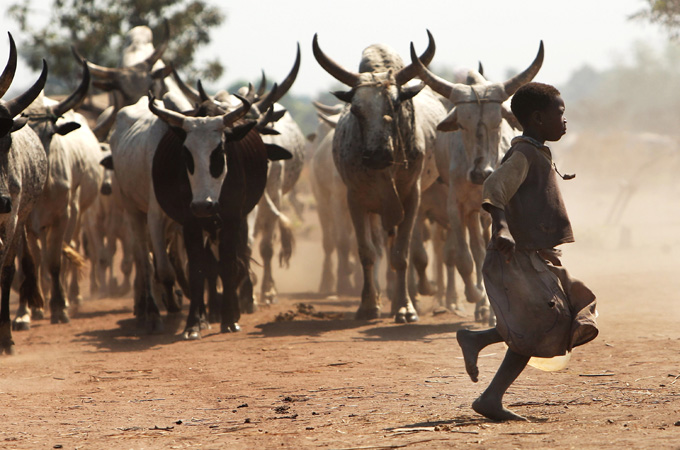 Botswana is known as a market that has not only diamonds to offer but huge numbers of cattle and a long-standing industry in this sector. The Botswana Daily News reported that Mr Kebonang, the Assistant Minister of the Department of Trade and Industry said recently the population of cattle, goats and sheep in Botswana was approximated 2.5 million, 1.8 million and 300 000 respectively while the import value of leather/products stood at 130-150 million Botswana Pula (2010) with exports ranging just between P50-60 million.

Here you have it again: Another African country that has more livestock than people, in fact around double as many, and yet THEY are importing leather because the industry remains purely developed!

I can only say: Unbelievable opportunity for investors, widely missed, and hardly mentioned by the media.

Kebonang says a minimum of 20 pairs of shoes can be made from a single hide and each pair would later be sold at P500 or more bearing in mind determinants such as quality.

At the moment, Europe and Italy in particular are some of Botswana’s raw products consumers and Mr Kebonang says the same market has been secured for finished products. He adds that factors such as market availability determine viability of a leather park. “Some tanneries collapsed due to the fact that they were not run like industries but rather by individuals without proper coordination.”

Another country that is setting renewed emphasis on its leather industry is Kenya. The country had a once thriving leather industry, but that collapsed in the 1990ies due to policy changes.

Now leather is back on the agenda: Through the Ministry of Industrialization, the Government of Kenya has mapped out a clear path that is meant to revive the sector and push it to be among the leading leather-producing nations in Africa. And for you as a pioneer investor in that regard such plans are the ideal development context that you are looking for, because the business environment will be much more enabling and we can expect this to be an industry on a journey to an upward trend.

Indeed, because Kenya goes even further: Plans are already in motion to set up the first purpose-built ‘leather city’ in Kenya as part of the recommendations made by the leather industry revival task force. US$ 11 Million have been made available. The new city will be situated in Machakos County just outside Nairobi, and will also be the first of its kind in Africa. Here you go !

According to government estimates, Kenya has an annual demand of between 24 to 32 million pairs of shoes a year, but only manages to manufacture four million pairs a year and imports the rest.

What else is interesting and what do African entrepreneurs do and say about leather?

Well, making the roaming through African business trends my passion and profession I can confidently say that some of the best and most sought  after leather products are currently coming out of Nigeria, South Africa, and Ethiopia in the form of luxury leather handbags. Several upcoming entrepreneurs and brands have made a name for themselves at international fashion houses.

One such example is  Zainab Ashadu who started crafting handbags in Nigeria calling her brand Zashadu Bags.

Zainab started her business just 3 years ago when she returned to Nigeria after living in London for 12 years (ladies and gentlemen, see, it can be done!). She is the founder and creative director of Zashadu Bags, a sustainable luxury leather handbag company which specializes in handcrafted leather pieces.

Operating in Lagos, Zainab uses locally sourced materials including leather, exotic skins and rough cut semi-precious stones and produces her luxury handbags out of a workshop where she employs local artisans who handicrafts the products. The company sells its luxury handbags locally and internationally on its website and supplies a few shops. Items listed on the online shop this week have currently a starting price of £320 (US$524) for a box clutch bag while the priciest are bags  selling at £1,100 ($1,800) a piece. She is now selling also in London, Paris, and the US.

I also had a chat with one of the members of the Kenya Leather Development Council during my trip to East Africa in 2014. He is a long-standing entrepreneur of Indian origin who has been mainly in the restaurant and bar business for many years owning a small chain. Just a few years ago he started to venture into leather processing and the selling of shoes.

In just a couple of years he opened 8 shops in Nairobi and wants to grow them to 20 outlets soon! He has even started public offerings at the Nairobi Stock Exchange.

“So which business goes better, restaurants or shoes?” I ask. “Shoes – without a doubt,” he says.

And lastly there is Bethlehem Tilahun Alemu, the young Ethiopian entrepreneur and millionaire who earned her fortune with SoleRebels (largely non-leather shoes). She is one of Africa’s most celebrated entrepreneurs who also made it onto the cover of Forbes Magazine, into CNN, and onto the round table of Africa’s politicians. Guess what her new business venture is called?

That’s what I am talking about. Maybe it is your time to start your own little African leather empire.

Learn how to do business in Africa click here