Iconic female leaders who pulled their weight in the fight for the decolonisation of African countries in the 1900s.

We take a look at three incredible women who fought the good fight for independence across the continent:

In the early 1920s, there were only a handful of women in Nigeria whose education went beyond the primary school level. One of them was Funmilayo Ransome-Kuti who was the first female student admitted to Abeokuta Grammar School.

She later went to England for further studies before returning to Nigeria where she became a teacher and activist who used her privilege to fight against colonialism.

She fought the British colonial masters as well as the Nigerian traditional leaders used to enforce their rules. She did this with the help of other women in her organisation — the Abeokuta Women’s Union. 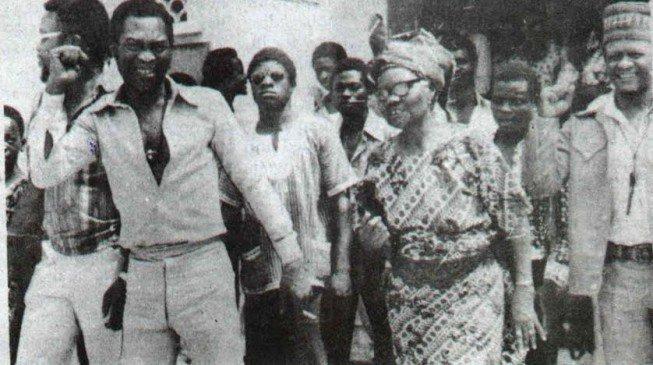 Fela and his mum,Funmilayo Ransome-Kuti a leading woman activist in Nigeria

In one particular case, they all came together to protest against King Alake Ademola of Egbaland when he wanted to impose taxes on women. Kuti and about 20,000 members of AWU stood outside his house protesting with the slogan ‘no taxation without representation’. They also chanted in Yoruba. “Alake, for a long time you have used your penis as a mark of authority that you are our husband. Today we shall reverse the order and use our vagina to play the role of husband,” they sang.

Eventually, their continuous protest against the Alake which lasted for about four years resulted in the self exile of the monarch. He remained in exile for one year before returning to his throne in 1950.

There are other cases of Kuti mobilizing local market women for what she called “picnics” and festivals whenever they needed to protest against the British colonial officers, corruption and the lack of women’s representation in politics.

Makeba was an Grammy award winning artist from Johannesburg. Like Kuti, she used her privilege to fight for equality. This South African singer dedicated her life to fighting apartheid and got exiled for it.

After losing her citizenship ‘Mama Africa’, as she was fondly called, was forced to stay abroad. There, she continued to fight against the apartheid system in her home country and for Civil Rights in America. She was finally allowed to return in 1990.

Makeba is one of South Africa’s most vocal activists.

Madikizela-Mandela is another popular female activist in South Africa. Three years after getting married to Nelson Mandela, her husband was convicted of treason and imprisoned for life. With her husband behind bars, Winnie continued to fight apartheid on her own while raising their young family.

During her fight for justice, she was imprisoned several times by the apartheid police. She was also banned, isolated and eventually tried for treason simply for fighting for South Africa’s liberation.