In Kenya, the NASA Leader Raila Odinga couple of months ago joined the long list of African Leaders who have sworn-in themselves as Presidents.

Exactly on a Tuesday morning, Odinga took oath of office as the People’s President at Uhuru Park, an event that was attended by thousands of his supporters.

His deputy Kalonzo Musyoka failed to attend the much anticipated swearing-in.

Others opposition leaders who have sworn-in themselves as President include,

Étienne Tshisekedi wa Mulumba was a Congolese politician and the leader of the Union for Democracy and Social Progress, the main opposing political party in the Democratic Republic of the Congo.

He was a candidate for President of Congo in the 2011 elections that many national and international observers, notably the carter Center,said lacked credibility and transparency.

Having officially lost to incumbent Joseph Kabila, Tshisekedi nevertheless declared himself the “elected president” of Congo. Policemen and Kabila’s presidential guards were subsequently stationed at every corner that gives entrance to Tshisekedi’s residence, placing him under unofficial House Arrest.

Abiola ran for the Presidency in 1993, for which the election results were annulled by the preceding military president Ibrahim Babangida because of allegations that they were corrupt and unfair.

The Situation forced Abiola to swear himself in as the People’s President.

Besigye, the main opposition leader dramatically swore himself in as president of Uganda in 2016.

“I Kizza Besigye swear in the name of God…..” he started, declaring himself as People’s President and a rightful leader. He was later arrested after the “swearing in ceremony”

Jean Ping is a Gabonese diplomat and politician who was the Chairperson of the Commission of the African Union from 2008 to 2012.

He was previously the Foreign Minister of Gabon from 1999 to 2008 and served as President of the United Nationas General Assembly from 2004 to 2005. 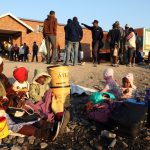 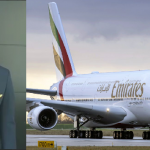