It was late afternoon and my wife and I were travelling on the H4-1 road in South Africa’s Kruger National Park, about 10km from Lower Sabie, when we saw three lions. They were sleeping but we decided to stop and spend some time with them in the hope that something interesting would happen. All of a sudden the lions were alerted by something but we couldn’t see why. Then we heard buffalos and became excited at the prospect of seeing some action unfold. The lions gave chase and at first the buffalo ran away, but then they stopped and, in a turnaround of events, they started to chase the lions instead! In the process of their escape, the lions reached the tar road while the buffalos maintained their distance and started to cross behind the red car pictured below. To our amazement two elephants then started to cross the road as well. We couldn’t believe our eyes, nor our luck at capturing three of Africa’s Big Five in one photo! 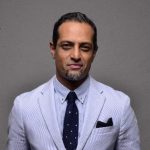 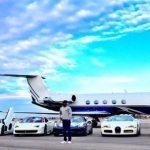