Italy’s navy and coastguard, ships patrolling on a European Union anti-smuggling mission, vessels run by humanitarian groups and a commercial tugboat rescued intending migrants off the coast of Libya.
In one operation to help the migrants, they panicked when they felt choked by fumes and began throwing themselves into the water in a desperate bid to reach a vessel operated by Malta-based humanitarian group MOAS so they could be rescued.

Some members of the crew also jumped into the sea in an effort to save them, and one crewman had to be rescued himself after he swallowed fuel and passed out as he was overwhelmed by migrants.

A Sky news reporter on board the Responder rescue ship told how the crew were radioed at 5am by the coastguard to go to the aid of 160 people in a sinking dinghy.

More than 1,000 people were rescued over the next three hours including three babies. 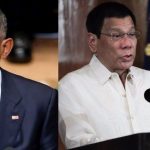