In previous years, controversy at the Oscars has centred on a host’s faux pas, an audacious dress or a trip down the stairs. This year the lack of nominees of African-American origin caused a stir.

A number of actors have chosen to boycott the ceremony and it started a deeper conversation about the structure of the movie industry in the States.

Stories about Afro-Caribbeans, let alone Africans, are a rare sight in Hollywood. And in the few instances when the stories from Africa have been told on the silver screen, it’s mostly been African-Americans starring. Here are six of the best (and worst) films starring Americans (and one English man) playing Africans.

1.
Will Smith as Dr Bennet Omalu in Concussion

Sometimes it’s hard to look past an accent. Will Smith tried a West African accent so generic, it was borderline offensive.

His performance as a doctor hell-bent on changing medical abuses in American football was solid if not remarkable. But after a number of his films that were probably not worth the bandwidth of an illegal download, this was something approaching a return to form.

Filmed before Denzel became the darling of every middle-aged woman around the world, this tragic story showcased his talent.

It’s also lucky Denzel postponed his dental work until after it was filmed so that he could capture Biko’s (un)Hollywood smile.

If a tear didn’t run down your face at the end of this film, then it’s safe to say that you have no heart.

The story of an hotelier who sacrifices himself to protect a number of civilians during the Rwandan genocide was so powerful that some called it the African Schindler’s List.

Don Cheadle – whose British accent was pretty awful in Ocean’s Eleven – did a much better job with his accent in this film.

4.
Forest Whitaker as Idi Amin in Last King of Scotland

Forest almost seemed to be born for this role. From his statuesque build, to his lazy eye (which intentionally/unintentionally makes you feel like you just did something to make him mad) he was able to capture the madness of the Ugandan.

5.
Idris Elba as Nelson Mandela in Long Walk to Freedom

After a critically acclaimed performance in The Wire, it was only a matter of time before he was going to grace the big screen. His performance as Nelson Mandela was accomplished and it was the first time the story of Madiba was given a human edge.

Even better, the film successfully managed to tell the story of Winnie Mandela as an individual rather than a sidekick.

Invictus was a steady film that showed how powerful the Rugby World Cup win of 1995 was in the progress of post-apartheid South Africa.

In a continent where oval-shaped balls are seen as a production mistake, the film had to be incredible to make an impact.

Many Africans commended Matt on his remarkable impression of an English-speaking South African, but the film itself was plodding. 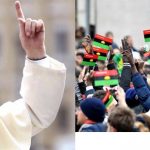