Africa is unlike any part of the world you’ve ever experienced. And that’s why more and more adventurous travelers are itching to explore this untapped part of the world. Africa offers something for every type of traveler— archaeologist, history buff, safari enthusiast, mountain climber, and beach bum– Africa promises wild adventures for all.

The Great Pyramids, near Cairo, are world renowned Egyptian icons, pictured in various Hollywood movies. However, these massive tombs are literally the resting places of the mummified remains of Egypt’s dead pharaohs, the sacred resting places leaders of history can continue to receive prayers, food, and other offerings in the afterlife.  The most recognized tombs at this location are that of Pharaoh Khufu (or Pharaoh Cheops) and the great Sphinx, the half-human half-lion monument.

Rallying the magnificence of the Grand Canyons in the USA, Fish River Canyon is made up of a 160-kilometer ravine that stretches 27-kilometers wide, with the racing Fish River ravine flows through the heart. The canyon is idyllic for hiking as well as for spotting zebra, wild horses, Kudu antelope, and over 60 different species of birds.

Reaching up a hulking 19,340-feet in the sky, Mount Kilimanjaro is the highest mountain in Africa and the tallest free-standing mountain in the entire world. Luckily, tourists can get an exhilarating view of the countryside, wildlife reserves, and glaciers below quite accessibly from Uhuru peak, the mountain’s highest point.

Bordering the lush riverbeds on either side of Zambia and Zimbabwe, “Mosi-oa-Tunya,” which translates to “smoke that thunders” is the largest body of falling water on earth. Victoria Falls is something to behold, as is the diverse wildlife that surrounds them. You can even take a refreshing dip in the natural pools on the Zambian side of the falls.

5. Valley of the Kings, Egypt

Near Luxor, on the west bank of river Nile, lies 63 tombs, containing priceless Egyptian antiquities, known as the Valley of the Kings.  The valley dates back to 500 years between the 16th and 11th centuries BC. It’s most known as the final resting place of Tutankhamun, who was discovered there in 1922.

A labyrinth of languid lagoons and dreamy lakes, something out of science-fiction-fantasy, can be found stretched out along the Okavango River in Botswana.  The purity and tranquility of the Okavango Delta draws a berth of wildlife that seeks sustenance from this unique water feature in the midst of virtual desert.

The Ngorongoro Crater is the world’s largest unspoiled, dry volcanic caldera. It stretches 19-kilometers across and plunges 600-meters deep from rim to floor. Ngorongoro acts as a protective enclosure for over 25,000 of large animals—including black rhinoceros, hippopotamus, wildebeest, zebra, eland, and gazelles—who live on the 260-kilometer crater floor.

Those who have witnessed the wildebeest and zebra migrate across the sprawling plains of Maasai Mara in Kenya to the Serengeti in Tanzania, dub it the “greatest wildlife show on earth”. The natural event sees thousands of wildebeest and zebra disembarking to new living quarters before the seasons change between July and September (it differs each year). Safari tours can be purchased to witness the extraordinary, natural event firsthand.

For a real cultural shock, take a tour to the remote Omo River, located in Southwestern Ethiopia. This experience will introduce you to more than 50 indigenous tribes who call this region home. Many of the people’s here remain true to their traditional beliefs and tribal customs and live in primitive African tribal camps.

The Virunga Mountains stretch along the borders of Uganda, Rwanda, and the Democratic Republic of Congo (DRC). But it’s the forests in the area that house a true natural treat! These mountains are home to the endangered mountain gorillas, which you can see perched among the countryside and active volcanic surroundings as you hike up the mountain’s major peaks—Mounts Karisimbii, Nyirangongo, and Nyiragira. 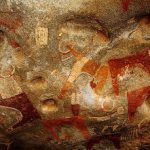