Since the Revolution of 2011, the art scene in Tunisia has gathered momentum. Under the dictatorship of Ben Ali, art and creative culture was suppressed — artists were forced to head abroad to find a market for their work and an environment conducive to free expression. Since 2011, more galleries have opened, more sponsorship has been devoted to art, and a new platform has been created, in the form of Carthage Contemporary, to promote modern Tunisian art.

Mohamed Ben Soltane is a hugely important figure in Tunisia’s emerging art scene. Artist and curator, he works as the Artistic Director of the B’chira Art Center, one of the key galleries and platforms for contemporary artists. His own work has been photographic and, more recently, in comic strip form and full of acerbic comment on life in modern Tunisia and abroad. Deeply political, his early pieces were photographs of the walls of Tunis when they were full of doodles and slogans at a time when visual culture in Tunisia was dominated by images of the President Ben Ali. His works have been exhibited in galleries in Barcelona, London and Algiers, and you can find an interview here with Mohamed talking about the art scene in Tunisia.

Born in 1978 to a Tunisian father and a Swiss mother, Ismail Bahri now divides his time between Paris, Lyon and Tunis. He studied in Tunis and at the Sorbonne and has gone on to exhibit at the Pompidou Center, Johannesburg Art Gallery, and the British Film Institute, among other major spaces. He works in mixed media, merging drawing, installations, video and photography to explore the theme of fragility within art and the capacity of the artist to capture the ephemeral and the fleeting. In his 2010 video work ‘Orientations,’ for example, viewers see reflections of Tunis in a pot of ink as the artist carries it through the city. The ink captures the image of the world — but only for a moment. You can watch itonline.

Born in Sfax in 1970, Mouna Karray studied in Tunis and Tokyo. She works with photographs, video and sound installations on questions of identity, memory and mental boundaries, and she has exhibited in galleries in Tunis, Paris, Frankfurt, and across West Africa. Her photographic work ‘At the Risk of Identity,’ for example, features images of a woman in various poses, before the artist takes her clothes and is photographed in the very same positions in a game of identity and difference. Her work ‘An Object on the Shore’ plays with the same themes using sounds. The listener hears chanting from the Koran, dogs barking, birdsong, car engines and a radio playing. The work frames the question of whether these religious, profane and mundane sounds form a set of fragments or a cultural whole.

Born in Tunis in 1969, Hela Ammar is now one of Tunisia’s leading intellectuals, as well as being an artist. She lives in Sidi Bou Said, where the gallery Le Violon Bleu is an important platform for her artworks. Ammar works with photography, sound installations, and recently with embroideries in her 2014 work, ‘Tarz.’ Her work is highly engaged with public issues — Ammar is a strong feminist and advocate for women and looks in her art to explore the female identity among the moral and religious conventions of Tunisia today and in the past. As a scholar and writer, she has documented the use of the death penalty in modern Tunisia.

Nicene Kossentini was born in Sfax in 1976 and now works in Tunis and Paris, having also spent time studying in Strasbourg. She draws and works with photographs, video installations and paint. Her themes are similar to those of Mouna Karray but handled very differently. Like Nadia Kaabi-Linke, Kossentini uses the analogy of the archaeologist to explain her approach. She explores memory and identity using images from her family album. Her 2011 series of works, entitled Boujmal (named after a dried-up lake close to Sfax), juxtaposes images of her mother and grandmothers with those of the dried lake bed. Kossentini is constantly looking for roots and the invisible links between generations. She’s been exhibited in London, Bahrain and Moscow, and you can find an interview with her here.

B’chira Triki Bouazizi is another key figure in contemporary art in Tunisia, both a working artist and a patron. She founded the B’chira Art Center in Sidi Thabet (close to Tunis) following the Revolution of 2011 as a center to support young artists and as a gallery space to exhibit their works. Workshops, studios and gallery spaces can be found at the Center. As an artist herself, she has exhibited in Tunis and at the Venice and Alexandria Biennials. B’chira works with ceramics, installations and paint. You can find details of one of her works, ‘The Gold of Tunis,’ on the Imago Mundi site and in Imago Mundi’s publicationTunisia: Turbulences.

Fakhri El Ghezal works from Akouda, where he was born in 1981. He studied in Tunis at theInstitute of Fine Arts, training in engraving and photography. Today he’s an award-winning photographer, with experience exhibiting in Africa and beyond. His 2006 photographic work on the Berber village of Takrouna won him third place in the Arab Tunisian Bank Art and Culture Awards, and in 2012 he was one of the Tunisian artists featured in the inauguralChkoun Ahna exhibition run by Carthage Contemporary. Most notably, he was one of the artists showcased in the Here and Elsewhere exhibition at the New Museum in New York in 2014, the largest exhibition of contemporary art from the Arab world ever to be shown in New York. His images of blank walls and empty frames where previously the image of Ben Ali stood were featured in New York.

Faten Gaddes spends her time working in New York, Paris and Tunis. She’s a leading photographer whose works can be found in the Tunisian state collection and many private collections, including that of Michelin. Born in 1974, her works are often exhibited internationally and in Sidi Bou Said. Gaddes is one of the key modern recorders of modern Tunisia, with her series of works entitled My Tunis documenting the symbols like objects and clothes that form the links between past and present. Her 2011 work ‘Punching Ball’ is one of the most controversial in recent times. It features four images of women veiled not with cloth but their own hair. Each is printed on a punching bag suspended within a boxing ring with a symbol of either Judaism, Christianity or of Tunisia. When exhibited in 2012, it led to protests and violence perpetrated by religious hardliners.

Born in Tunis in 1982, Ali Tnani works in Paris and is one of the most exciting and innovative of the artists to have come out of Tunisia in recent years. Another to have studied at the Institute of Fine Arts in Tunis, Tnani uses everything from computer programming, drawings and photography, and sound and physical object installations. Much of his work plays with questions about data, the information society and our relationship with modern machines and computers. The Data series of works, including ‘Data Trails’; ‘Data, Dust’; and ‘Crackling Data Machine,’ combine discordant sounds, suspended computer drives and images programmed into a screen. You can check out videos of lots of his works on hiswebsite.

A truly cosmopolitan figure, Nadia Kaabi-Linke grew up in Tunisia, Kiev and Dubai, studied in Paris and Tunis, and divides her time between Berlin and Tunis. She’s exhibited everywhere from Cairo and London to Alexandria and Venice. Her work uses various media, pictures and physical objects to explore questions of place, culture and history in what she calls ‘archaeology of the present.’ Her work ‘Archives of the Tunis Banalities,’ for instance, was created by taking impressions of the graffiti, love notes, insults and abuse found on the walls of Tunis and adding Indian ink to highlight the random messages. And her piece ‘Flying Carpets’ won the 2011 Abraaj Capital Art Prize. 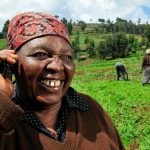 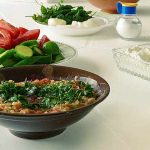